Muffy and the Big Bad Blog

"Muffy and the Big Bad Blog" is the second half of the seventh episode in the fourteenth season of Arthur.

Muffy discovers that web blogging is a great way to keep her readers up to date with her every move... whether they are interested or not! But then she goes too far and publicizes a disagreement with Francine.

Arthur and Francine are seen playing tennis, while Muffy is spectating and writing down everything that happens. Arthur gets annoyed by Muffy constantly typing, even down to things like "Arthur grunts when he serves" and "Now Arthur is losing his cool." Muffy tells Arthur that he would do better if he could focus on the game, instead of on her. Arthur looks to the viewers and groans.

Muffy and the Big Bad Blog

After the title card, Muffy walks into class, and she announces to the class that she will be going to Costa Rica, and she will be posting about it on her blog. Mr. Ratburn doesn't understand what a blog is, so Brain explains that it is when someone writes their thoughts and posts them on a website for others to read. Muffy states that her blog is called The Muffington Post.

The following scene is a montage of Muffy blogging in Costa Rica, and her classmates reading about it online. Mr. Ratburn enters Computer Fun and buys the most user-friendly computer, which is, according to one of the employees, "well worth the expense."

Back at Lakewood Elementary, Mr. Ratburn gives the class an assignment to research their favorite author. However, the class is quickly distracted when Muffy announces that she is back from Costa Rica, and she will be answering people's questions on her blog. Arthur and Buster later find out that Muffy is now blogging about the positive feedback to her blog.

Muffy is now able to blog using her MySmartPhoney, because she has internet access on it. However, all she does is blog, even during baseball games and at school. Mr. Ratburn confiscates her MySmartPhoney when she uses it in class. He returns it at the end of class, and he also tells Muffy that she should do things besides blogging. Muffy agrees, saying that if she doesn't do anything else, she won't have anything to blog about.

Francine goes to Muffy's house to hang out with her, but Muffy is too busy blogging. Meanwhile, Mr. Ratburn has finally set up his computer, and gets a message telling him how to "earn money from home without doing any work", which he finds fascinating.

At school, Muffy asks Buster, Francine, and Binky if they read her blog. They respond that her blog is getting boring, as she posts about things like how she ate a salad for lunch. Francine tells Muffy that her blog needs to talk about things that people actually care about.

Muffy excitedly calls Francine, telling saying that she posted something interesting on The Muffington Post. Her new post reads: "Your humble blogger dissed by BFF! Take the poll: Was Francine right or wrong to refuse to read her best friend's blog? Vote now!" Francine gets upset, and sends her an email. Later, she finds out that Muffy posted her email on the blog, and it generated a lot of traffic on her page. Francine gets annoyed at Muffy, asking, "Can't anything be private?" Muffy proclaims that she will post that as a discussion topic. Buster gives Francine advice from his mom, saying "Don't send anything in an email that you wouldn't want on the front page of the newspaper." This gives Francine an idea.

Brain puts Francine's newspaper, The Frensky Star, online. Francine makes a post declaring Muffy as "the bully of the blog-o-sphere." Muffy retorts by posting on The Muffington Post about Francine being a copycat. This results in Muffy and Francine constantly posting about each other. Back at his house, Mr. Ratburn receives an email with an offer to buy swampland in Florida. He opens it, but several new windows pop up on his computer.

In the school cafeteria, Arthur and Buster are discussing Muffy and Francine's blogs. Muffy and Francine argue over who started the fight, but this is cut short when Brain announces that a new blog has popped up. It is about the disagreement Francine and Muffy had, and it is signed by "Mr. Chatterblog", who turns out to be Binky.

Muffy and Francine decide to combine their blogs into one, and start an advice column run by both of them. Mr. Ratburn then comes in with a BoysenBerry, and tells the kids about his blog, The Rat's Nest. He talks about how it is devoted to correcting grammatical errors, but it also has puns and word problems. The episode finishes with Muffy and Francine deciding to go to the park, while Mr. Ratburn continues to talk about his blog. 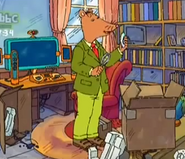