Oliver's father is the father of Oliver Frensky, the father-in-law of Laverne Frensky and the paternal grandfather of Catherine and Francine. He appears in the episode "Background Blues" helping Francine learn about the Frenskys. He once owned a restaurant called Hamburger Castle. He is seen again in "Francine's Pilfered Paper."

He also appears in Arthur's Perfect Christmas with the rest of the Frensky family. In this appearance, he is recolored to have brown hair. 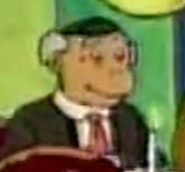 In Arthur's Perfect Christmas with a new appearance.

In Arthur's Perfect Christmas, oddly with his original appearance.

Outside his Hamburger Castle
Add a photo to this gallery
Retrieved from "https://arthur.fandom.com/wiki/Oliver%27s_father?oldid=389581"
Community content is available under CC-BY-SA unless otherwise noted.