Oliver Frensky[2] is Francine and Catherine's father. He works at the Elwood City Dump, and enjoys riding his bike.[3] He has a good sense of humor. He and his family are of Jewish faith, as first seen in Arthur's Perfect Christmas.

He is usually seen wearing an aqua-green collar shirt, beige pants, and brown shoes. He has medium brown hair and a brown-butterscotch complexion. When he was working as a garbage man in "April 9th", he wore a thick, dark green, long sleeve shirt and pants. Along with that, he wears yellow boots, a construction hat, and gloves. While in "Francine and the Feline", he wore a bluish-gray overall type of outfit with a white, long sleeve shirt under it and black boots.

Oliver gets along well with everybody he interacts with, and very rarely gets mad. He can be amicable only when the situation calls for it as when he changed the family's day for ice cream during the time Muffy stayed over, "Poor Muffy" and when Francine and Catherine agreed to and wanting to redecorating their room and then the latter quickly wanting to move in her own. "Francine Redecorates"

He and Francine have a good relationship, though like most fathers, he can be firm with his two daughters when they are acting up. In spite of his family's middle-class to lower-class status, he takes it all in his stride, not letting it get him or his family down. He also takes pride in his job as well. He can be embarrassing to his teenage daughter, Catherine, as when she questions his choice of job, he makes light of it and responds in a dramatic way like from a soap opera. "My Dad, the Garbage Man"

His job is to be a garbage man. "My Dad, the Garbage Man" He explains that people could make whole cities out of garbage. He was once a volunteer fireman.[4] He also coaches Lakewood Elementary Baseball Team 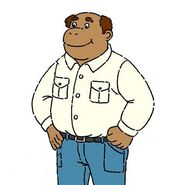