Ms. Paige Turner is the librarian at the Elwood City Public Library. Her common rules are for everyone in the library to be quiet. The kids refer to her as Ms. Turner, since she is an adult.

She is depicted with a white complexion and short hair and wears brown square glasses, a tan sweater, gold necklace, purple dress, gold watch, bracelets, and brown shoes, and usually carries a yellow pencil on her hair. Her hair was originally brown when she debuted and in the following seasons, until in the Season 11 episode Mr. Alwaysright, where her hair was changed to blonde. Originally, she had a brown complexion, dark brown hair, and was wearing pink glasses, a blue skirt, and a cream yellow jacket when she made her first appearance, but her appearance was drastically revamped in Arthur's Lost Library Book. Like Arthur, her eyes are like Prunella's when she occasionally takes off her glasses. However, in the books, she has a tan complexion and gray hair. 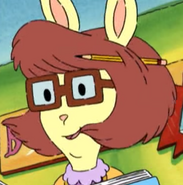 Paige Turner is depicted as kind and friendly to people who check out books. Like Mr. Ratburn, she is strict. Her only dislikes are when people in the library get too noisy or when they don't behave. In some of kids' dream sequences, she was pictured as an antagonist when they fear something bad would happen, such as getting a book chained and yanked back to the library (Arthur's Lost Library Book), dressing up Arthur as a baby for checking out baby books (D.W.'s Library Card), or revoking D.W.'s library card after damaging a book (D.W.'s Library Card as well), plus the library appears haunted in the dream sequences as well.