"Paradise Lost" is the first half of the ninth episode in the thirteenth season of Arthur.

Baby Kate begins to learn to talk, but starts to not be able to understand Pal anymore. They go to the Dolly Llama for an answer.

In the introduction, D.W. is first angry that, unlike Kate, she has to have table manners because she is growing up. But when her dad says she is big enough to go out to the ice-cream truck with Arthur, she is happy about growing up.

While playing with Pal, Kate notices that Pal's speech sometimes sounds like incomprehensible barking to her.

Kate says “uppie” to let her parents know she wants to sit in her high-chair. The parents are delighted, while Arthur and D.W. do not understand what the fuss is about. Pal congratulates Kate, even though they do not know what exactly she did. Kate hears barking again and decides to seek help.

Kate and Pal talk to Amigo. Amigo explains that the same thing happened to Vicita until they could no longer talk to each other at all. Pal has a nightmare in which an older Kate buys him a pink coat instead of a bone because she misunderstands him. He wakes Kate and tells her about a wise llama at the zoo.

Kate and Pal find an advertisement for the zoo in a magazine and put it on D.W.’s bed. D.W. talks her parents into going there. With the help of a cow Kate and Pal reach the llama, who tells them that there is nothing they can do about Kate growing up.

Kate starts acting more babyish than usual, hoping that this will stop her growing up. It does not work.

When the Reads are having dinner at Grandma Thora’s house, Thora can tell by Killer’s whimper that she wants to play fetch. Killer explains to Kate and Pal that she and Thora can not have conversations, but Thora usually knows what Killer means.

At home, Kate eats with a spoon and uses the word “ball”. Her parents are relieved and Kate learns to play fetch with Pal.

“The llama resides at the peak.”

“With your own species your mind will dwell.”

"I can't think of anything worse than not being able to talk to Pal." 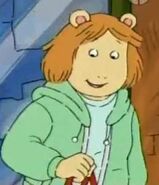