Arthur Wiki
Register
Don't have an account?
Sign In
Advertisement
in: Candidates for splitting, Characters, Secondary Characters,
and 5 more

Perky is Mrs. Wood's pet dog and the mother of Arthur's dog Pal. She can be mean at times, and is referred to as "Jaws" by Mr. Higgins the mailman, according to David.

When Mrs. Wood goes away on vacation, Perky stays with Arthur. She acts very grouchy and unfriendly when she comes to stay at Arthur's house. Arthur does not know what's bothering her, and believes that he has ruined her life. When Mrs. Wood returns from her vacation, Arthur cannot find Perky, but ends up finding her snuggled up behind the living room chair, where she has given birth to three puppies. She acts very happy when Arthur pets her, revealing that the reason she was so angry was due to her pregnancy. Nobody seems to take any notice about it. As a reward, Mrs. Wood lets Arthur keep one of Perky's puppies, which winds up becoming Pal in the end.

In "Arthur Writes a Story," she was seen in two flashbacks. The first was when Arthur started to write a story about how he got Pal. The second showed her as an elephant in the false stories that D.W. suggested to Arthur after she thought the story he was trying to write was boring.

In "What Scared Sue Ellen?," Sue Ellen hears something howling in the dead woods and becomes frightened, so she, Arthur, Binky, and Buster decide to find out what it is that is scaring them. It turns out to be Perky who was stuck in a tree trunk. She is reunited with Mrs. Wood, who asks to give Arthur and his friends a kiss for rescuing her, but this scares the gang away. Perky isn't seen after these episodes.

Perky with her puppies 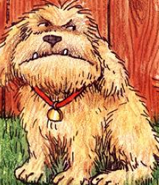 Perky as an elephant
Community content is available under CC-BY-SA unless otherwise noted.
Advertisement