Pick a Car, Any Car

"Pick a Car, Any Car" is the first half of the sixth episode in the seventh season of Arthur.

When the Read family car breaks down, Arthur is heartbroken... and a little bit suspicious. Will he be able to use his brain to save the vehicle before it is replaced?

Arthur and his family always had the same car, their purple station wagon, even since he and D.W. could remember. The the car now appears to have broken down, but Arthur hopes that it can be fixed because he has fond memories of it. Meanwhile, the parents call a mechanic named Joe and he tows their car in to get it fixed at Best Repair Shop. Joe says that the engine's "serpentine belt is overloading the transmission, and that the head gasket and piston rods are also in bad shape.". He throws in the cost of the timing belt, but unfortunately the price was too high for Mr. Read.

At home, D.W. wonders if they are going to get a new car, but Arthur objects, saying he would rather keep the car they have, despite mechanical problems; Mom and Dad say they can only afford cars that have been previously used, but optimistically say that they are new to them. D.W. asks for a unicorn themed motor home with hot tub, but their mother says that that they would need to get a smaller car, which is shown to be a two-passenger roadster (closely resembling a first-generation Mazda Miata). In her dream sequence, she leaves her family at the side of the road in the middle of nowhere. Their father pictures himself driving a charcoal gray SUV (closely resembling a 1993-1998 Jeep Grand Cherokee model), driving on the road on the rocky cliffs. Later at night, Arthur's father says that if they can't sell their purple car, it must be delivered to the junkyard. Arthur wonders what the junkyard is, and his mother tells him the junkyard is the place for vehicles that have completely broken down and cannot be fixed. Then, Arthur has a nightmare about the car being taken to the junkyard. He is dressed as a bandit and is attempting to salvage the car before it is discarded. Arthur then gets inside the car through the open window of the driver's door and rolls up the window before the guard dog gets in. Arthur then attempts to start the car, but an electromagnet attached to a tower crane lifts it above the ground. The man operating the crane's electromagnet is revealed to be Joe, who was attempting to fix the car in reality. Arthur quickly jumps out of the car and watches the car get thrown into the incinerator. Arthur then wakes up and finds out it was just a dream.

The next morning, when Arthur and Buster are walking to school, Buster hints to Arthur that his family could get a better car, like Buster's mother Bitzi's. However, in the flashback, Bitzi's car turns out to be a dilapidated car which had a knocking sound from the engine, the body bouncing up and down; the interior had worn-out upholstery and seat belts and some of the tears in the upholstery were duct taped all while Buster was jumping up and down in the car while Arthur was sitting still.

When When Arthur finally returns home from school, his family's car is back from Best Repair Shop, but he is disappointed to see the "FOR SALE" sign on the windshield inside the car since he desperately wants to keep it.

The next day on Saturday, the Read family goes to Crosswire Motors, owned by Muffy's father Ed Crosswire to test drive some cars. The parents try out a station wagon that is slightly larger than their own, but Arthur says the seats are not as comfortable as the ones in their car. Then they try out some more cars including a yellow hatchback, a red minivan (closely resembling a 2000-2006 Mazda MPV), a blue pickup truck, and a convertible (only with Arthur and D.W. in it), but Arthur objected them all, since he only prefers the car they still own.

The next Monday, when Arthur and Buster are heading for school, a green station wagon driven by Bailey pulls up. Muffy asks Arthur if he would like a ride to school, and he accepts it, so Buster attempts to get in too, but Muffy only wants Arthur to ride with her, leaving Buster on the sidewalk. While Arthur and Muffy ride to school, they both argue about cars while Muffy fiddles with the power window switches on the door panel. Muffy persuades Arthur that his family would enjoy the car Bailey is driving, but Arthur disagrees and actually prefers the car his family owns. Muffy then humiliates Arthur by telling him that cars die time after time. Arthur then quickly asks Bailey to stop so he can get out of the car and quit listening to Muffy put pressure on him about cars she suggests. As Arthur gets out of the car, Muffy tells Arthur to apologize because the car she believes would be great for his family won't be around for long.

Back at the Reads' house, Arthur's father and Joe are having a conversation about the broken down car. In Arthur's room, Arthur overhears his father and Joe talking about the car, and tells Buster that his father is going to sell it the mechanic who will take it to the junkyard. Outside, they hear a rattling noise from the car when Arthur's father is attempting to start it. Buster then suggests that Arthur should call The Car Talk Guys, Tom and Ray Magliozzi (celebrity cameo). When Arthur calls The Car Talk Guys, he panics about the problem with his family's car, and asks for help on saving the car from being sold to the junkyard. Then, Buster holds the phone and makes a burping noise, imitating the sound the car made when Mr. Read was attempting to start it. The Car Talk guys suggest that the sound was literally a baby's rattle, which could be in the exhaust system. Arthur then tells his father and Joe that Baby Kate's rattle is in the exhaust pipe.

The theory was proven correct, and Mr. Read pulled the rattle out of the exhaust pipe while Joe left. The car turns to not really have any problems. Then, Mrs. Read asks if they could go out for pizza, ice cream, etc., and Arthur replies that they would rather just go out for a drive. The Read family then goes for a ride in the car. 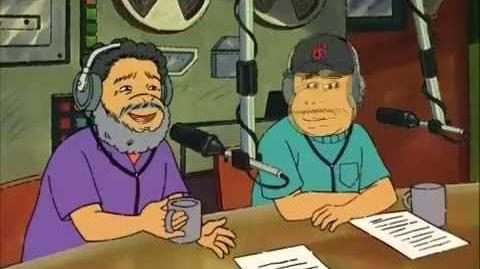 A flashback scene where Arthur and Buster ride in Bitzi's junky car.

The "FOR SALE" sign inside the windshield of the Read family's car.

The junkyard scene in Arthur's dream.

Arthur and Muffy debate over new and used cars.