"Prunella's Tent of Portent" is the first half of the sixth episode in the twentieth season of Arthur.

At the Elwood City Picnic, Prunella pretends of seeing into the future at her fortune telling booth. But her best friend, Marina, becomes doubtful of her mystical powers.

The episode starts off with D.W. make a balloon animal. Arthur thinks it's a waste, but Buster thinks it's an alien tadpole. Buster then goes to Prunella's tent to have his fortune told.

Meanwhile, back at the balloon animals Arthur pops a balloon. Prunella says that Arthur will pop a balloon. Arthur says that's it's not a prediction if it already happened. Prunella then says that'll it'll happen in the future. Buster and Prunella go in the tent, and then Arthur pops another balloon.

Prunella sees that many ants are eating a dropped ice cream cone. Her prediction is "The lost one will join the line, and the final bite will taste sublime." Buster wonders what that means, but Prunella tells him that's it's for him to interpret. Buster then exits, and Prunella joins Marina, and tells her that she's excited for the sleepover tonight. Marina gives Prunella a best friend necklace. She explains that each friend wears half of the message, and when together, it reads Best Friends.

Prunella takes Marina to the fortune tent to tell her fortune. Marina says she doesn't have too, but Prunella insists. While making the predictions, Marina denies them and thinks they're all false. Shocked at the situation, Prunella makes a bet that she will make 3 predictions, and all of them will come true by tonight. Prunella says that if she loses, she gives up fortune telling. And if she wins, Marina will have to do the "I'm sorry dance" in front of everyone.

Seeing Slink walk with a balloon and a stuffed hippo, the first prediction is that she'll get a prize. Then she sees Binky dunk Mr. Ratburn in the water. She uses that for the 2nd prediction, and that she'll be dripping wet. The 3rd one is that something safe, something safe will be lost, and then come back. Later, Prunella and Marina do the crab walk. Jessica wins the prize which is a box of cookies.

Marina says that the 1st prediction won't come true, but Jessica gives the cookies to her because she's allergic to nuts. D.W. gives a balloon to Carl and says it's a melon. Arthur reminds her that they're supposed to be making balloon animals. D.W. then changes it to be "a toad that swallowed a melon." Soon, Marina and Prunella and they have lunch and Buster accidentally spills water on Marina.

Marina thinks it doesn't count because she's not "dripping wet", but Prunella sees a drop and counts it as a prediction. Later, Prunella arrives at the sleepover they're having. Marina tells her that she just mad popcorn and that she hasn't lost anything. Prunella and Marina are in their room, when Prunella sees a part of Marina's necklace and decides to put it in her pocket.

Prunella suggests to connect neck charms because they're best friends. Marina looks for it but she can't find it. Prunella then puts it on her bed and says she found it. Prunella says that the 3rd prediction came true because something precious was lost then found. They then watch a Henry Screever movie, but Prunella wants to do something else since it reminded her of being honest.

They then play go fish, and Marina wins. Prunella says that it was fair since she won the bet, and Marina won the card game. They go to bed, and Prunella has a nightmare about meeting a hooded figure in front of a pot with a liquid that shows Prunella hiding the necklace bracelet. The hooded figure has the part of her necklace bracelet, and it reveals to be Marina. She drops it in a pot of liquid.

Prunella wakes up and confesses to Marina. She says she already knew because she heard it. She pretended not to know because Prunella wanted her to believe her so badly. Prunella gives up her bracelet, saying that she could give it to someone who deserves it. Marina denies the offer, saying that it takes a little more than that to destroy a friendship.

Buster shows up at their house and says "The last bite will taste sublime," is driving him nuts. Prunella says she's not telling anymore fortunes but Marina objects, saying that she doesn't have to stop fortune telling for her.

The episode ends off with Prunella making a prediction that Buster will stop wanting his fortune told and Marina guessing that Prunella wants eggs for breakfast. She says it's because it's what she eats every time she comes here. Prunella says she'd rather have cereal because she doesn't want to be "too predictable." 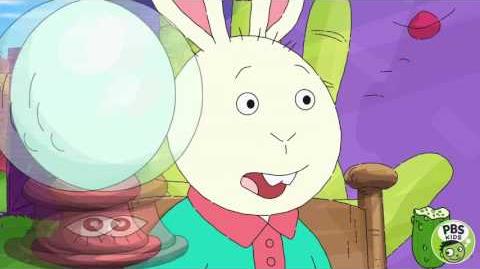