Return of the Snowball

"Return of the Snowball" is the second half of the ninth episode in the seventh season of Arthur.

Six months, two weeks, and four days after it disappeared, D.W.'s snowball reappears in the Read family freezer. But how can she prevent it from melting or being stolen again?

The beginning of the episode starts out like a Star Wars opening but instead of it saying "A Long Time Ago In A Galaxy Far Far Away" it says "Recently In A Galaxy Far Far Away" then the title says RETURN OF THE SNOWBALL then Arthur narrates the story part and says "There is unrest in the Read home. D.W. still thinks about the snowball all the time and won't shut up about it.-" Then D.W. cuts into the story and says "Arthur stole my snowball from the freezer! I know it was him! then Arthur says to her "Quiet D.W. I'm the Narrator." Then Arthur continues by saying "To combat the dark side of D.W. Arthur has-" Then D.W. cuts in again and says "Mom!" Then Arthur tells us "Ignore her." then says "As I was saying...." then Jane cuts in now and says "Arthur let your sister talk." to which then Arthur tells Jane "But it's about THE SNOWBALL!" Then Jane then says "Oh no! that again?" then D.W. and Arthur bicker until the camera goes into the earth and see D.W. in the window in the kitchen opening the freezer and then D.W. gasps surprisingly to see that's it still there.

RETURN OF THE SNOWBALL

Where were you between six months ago in mom's party?

Then Arthur tells her he was listening to her whine about her snowball 24 hours a day.

Where did he keep the snowball?

Then Arthur does not answer her question, instead he yells "Mom!" Jane then sends her to her room and then closes the door, D.W. then says "This isn't going to be easy as I thought." Then D.W. has an idea, she sneaks out of her room to make sure her Mom's not looking then calls Brain and tricks him by deepening her voice to trick Brain that it's Arthur. Then as soon as Brain goes to Arthur's house she then tells a lie to Brain that Arthur went to buy medicine and told her to keep Brain company she takes his arm and then goes inside. Then she breaks her piggy bank with a hammer and drags Brain and then lays his hand flat and puts the coins in his hand, then asks him to do science and figure out who stole her snowball. Then after she opened the cooler, She finds out it shrunk even more. Then Brain asks her if Arthur's coming back." Then she asks Brain what's the problem and time is money then she drags her snowball to the jar and let the water drain into the jar. Then Brain asks her, "How could it be stolen if you have it," Then D.W. sits the snowball back into cooler and then shuts it. Then she asks Brain "Could a snowball just get lost in here for six months without getting smashed?" Then as soon as Brain wants to figure it out he asks for a measuring tape, Then she grabs a roll from the kitchen drawer and tosses it to Brain, then once she asked him if it could get smashed, Brain says "Yes."

Then they go to another experiment after D.W. hands him a dollar bill and three cents. Then after she asks Brain "What about the freezers Arthur could just gotten too, Then Brain rushes to the freezer and gets a chocolate ice cream container out and then after they found out all the mysteries then Brain was almost finished with his sentence until Arthur finds him and D.W. in the kitchen. Then Arthur asks Brain what he is doing and then D.W. answers his question by saying "He's investigating." Then Arthur asks her "Is this about that stupid snowball?" Then Brain says No and then he realized D.W. fooled him. Then both Arthur and Brain rush from the house then D.W. yells for him to finish what he was saying about the ice cream. Then D.W. yells "ARTHUR YOU DID THIS ON PURPOSE!" Then Arthur and Brain run off just right before Jane asks her why she was screaming. Then D.W. tells her it was nothing and she growls and dreams about Snowball rowing away from D.W. in a river inside a black dress shoe, Then snowball is now completely small and his voice turned into a high-pitched one. Then D.W. cries as he melts. After D.W. stops thinking about her dream she looks in her cooler and cries and says Goodbye to it while dumping what was left of it inside the jar. Arthur stood behind her and said it was him and that he did it. Once D.W. heard everything he said she gasped, and Arthur told the story all about it and then after she asked him why he took it, Then Arthur disgustingly says "I told you I never took it!" Then she asked Arthur if he didn't take it then who did." Then Arthur said maybe somebody threw it out by accident, or maybe it melted and then requested D.W. if she could stop talking about it then D.W. tells him "How could she forget about it then it was a crime." Then Arthur walks away thinking he tried, Then D.W. stops him by apologizing to Arthur then she thanks for him for the fake one and it was almost a good." Then Arthur then tells her "Sure D.W." then walks out of frame. Then she takes the jar and dumps it outside her window and then she sees Emily and her nanny heading to the pool and tells them she wants to come too. Then as we scroll up we see a U.F.O. in the sky with one adult alien and two kid aliens." Then the kids argue and then their father tells them if they continue to argue they won't go to an asteroid fair. Then it leaves the earth and flies into outer space. 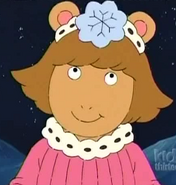