Rodentia Ratburn (also known as Ms. Ratburn) is Nigel Ratburn's sister. She appeared in "Arthur's Substitute Teacher Trouble" as a substitute teacher for her brother when he was losing his voice.

At first, Arthur and his friends were afraid her teaching skills might be more difficult than Mr. Ratburn's, due to the fact that Mr. Ratburn is the strictest teacher at Lakewood Elementary School. However, after Ms. Ratburn arrived into the classroom, her teaching skills turned out to be very simple, including the 1X's tables, color mixtures (such as yellow and blue make green), and puppetry. In the aftermath, Arthur and his friends proved her teaching skills were way too childish for everyone in the third grade (Brain had the strongest opinions), and her brother finally returned the next day.

Rodentia was also seen at Mr. Ratburn's wedding in "Mr. Ratburn and the Special Someone."

In her first appearance, Rodentia looked very much like her brother, except with short brown hair. She wore a cream-yellow shirt and a yellow vest, along with a skirt and high-heeled shoes. Like her brother, she wears shirts tucked in.

In Arthur, Buster and Francine's imaginations before they met her in the classroom, she had straighter hair and was wearing a headband and a feminine version of Mr. Ratburn's uniform.

Her appearances shown below are what she looked like in Arthur and his friends' imaginations before encountering who she really looks like, and their imaginations were completely sepia.

Rodentia as a baby 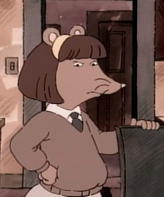 Rodentia as a child

Rodentia as a teenager in college 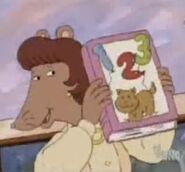 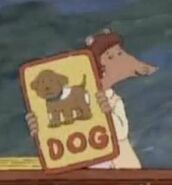 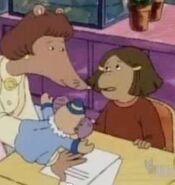 At her brother's wedding
Add a photo to this gallery

Rodentia is a fun-loving teacher with a sweet, high-pitched voice. She loves to teach, sing and play guitar, among other things, and gets along well with her students. However, her teaching curriculum is not considered challenging enough by Arthur and his third-grade classmates, suggesting that she may be more qualified to teach preschool or kindergarten. She didn't seem aware of the insufficient challenge she presented to Arthur's class, as she didn't increase the difficulty of the material much after Brain remarked how childish her lessons were. Still, she remains laid-back and optimistic.

Retrieved from "https://arthur.fandom.com/wiki/Rodentia_Ratburn?oldid=460293"
Community content is available under CC-BY-SA unless otherwise noted.