The Salon de Beauté is a hair salon in Elwood City. It is owned by Flossie who is also a hairdresser, and is the place where Muffy gets her hair done. Its name is French for "Beauty Salon". It is also across the street from the Loring Cinema.

It first appeared in "Francine's Bad Hair Day," but made cameos in later seasons when Muffy gets her hair done, and Francine once also. The awning above the window and scissors emblem above the front door were added in "The Lousy Week." In "Francine's Bad Hair Day," Muffy brought Francine there to get her hair done for school pictures, and then Francine eventually ruined it so she could grow her hair back to the way she looked before.

The inside of the Salon de Beauté has orange ceramic tile floor and ceiling, azure wood strip walls, and it also features wall tiles with various hairstyles. One of the faces on the wall title of hairstyles closely resembles Francine, but with a slightly different hair position. A client is required to have his or her picture taken and then choose from various hairstyles on the computer for how the hairdresser should set the client's hairstyle. The photo and hairstyles are displayed on a tan cathode ray tube output. A microphone is also used for a hairdresser to announce the client's new look. The overhead hair dryer is used to dry the client's hair once his or her hair is in the process of being curled or dyed. There are also pictures of different hairstyles hanging on the walls, in which those pictures are implied to be cut out from magazines. 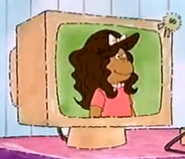 Overhead hair dryer
Add a photo to this gallery

Retrieved from "https://arthur.fandom.com/wiki/Salon_de_Beaut%C3%A9?oldid=263423"
Community content is available under CC-BY-SA unless otherwise noted.