Shelter from the Storm

"Shelter from the Storm" is the tenth episode in the eighteenth season of Arthur. It is a two-part episode.

When a powerful hurricane hits Elwood City, everyone gets affected. Ladonna's father is summoned by the Army Corps of Engineers. Muffy relocates to a shelter, while Arthur struggles to reunite lost pets with their owners and Brain seeks the help of a counselor to help manage his anxiety.[2]

Brain has built a model of world globe that shows Hurricane Sadie heading towards Elwood City. He shows the globe to Ladonna, Arthur, Buster and Muffy at the ice-cream shop, leading to a discussion about hurricanes and about being prepared.

Shelter from the Storm

Brain and his dad board up the windows of the ice cream shop. Brain realizes that he left his globe inside.

At night, the hurricane hits Elwood City. The Reads experience a brief blackout. Mrs. Read tells the kids not to worry.

Brain is excited, because his anemometer measures wind speeds of 110 km/h.

The Crosswires are about to have dinner, when the lights go out. Bailey restores electricity with a generator.

The Compsons are playing charades. Bud is just trying to convince Ladonna that he can read minds, when Mr. Compson, who is in the Army Corps of Engineers, is called away because the hurricane has caused the Katzenellenbogan River to overflow. That means he may miss Ladonna's birthday, which is just a few days away.

The next morning, the Crosswire Mansion has no electricity and the first floor is covered in a few inches of water.

Arthur watches a news report that shows a dog standing on the roof of a flooded house. Arthur is shocked.

The tree outside the ice cream shop has been blown over and knocked a hole in the front wall. The insurance covers the damage, but Brain cannot understand why their shop was the only building in the street to be damaged, even though the Powers made all necessary preparations. Mr. Powers picks Brain's damaged globe out of the rubble.

Brain tries to fix the globe at home, but the wind outside the window scares him. He throws the globe in the trash.

At school, Arthur keeps thinking about the dog, so Buster suggests calling the animal shelter and offer to help them. Muffy tells Brain that she has to move into a hotel. Brain looks tired and is very jumpy. In class, he realizes that he forgot to pack his schoolbag.

Ladonna has a video conversation with her dad until the connection breaks. He tells her that he might have to stay longer if it rains again. When Bud asks Ladonna about her birthday cake, she says that she does not care.

The Crosswires find that all the hotels are full, so they have to move into a shelter.

Ladonna has a dream, in which her family wants to celebrate three birthdays, Christmas, and high school graduation on one day, because her dad will be away so much.

There is some wind at night and Brain gets so scared that he tries to barricade his window. His parents promise to help.

Muffy cannot sleep in the shelter, because of the snoring. She makes friends with a girl named Kaylie, who shows her how to have fun in the shelter.

Meanwhile, Ladonna is miserable, because it rains that night.

The Powers visit a therapist named Dr. Paula. Brain insists that he is not crazy, but Dr. Paula assures him that she would be jumpy too if a hurricane had destroyed her office. Brain ends up talking for an hour without realizing it.

Arthur starts collecting money for the animal shelter which seeks to reunite pets and owners who were separated by the hurricane. However, Arthur collects only very little. D.W. suggests that he should tell heartbreaking stories. Mrs. Read agrees and helps Arthur to set up a website. Bud is miserable because Ladonna does not want a birthday party. D.W. tells him to throw one anyway.

Muffy accompanies Kaylie and her mom when they go to check on their house. It turns out to be damaged beyond repair.

Dr. Paula teaches Brain breathing exercises, which he considers unnecessary. He tries them at night, to no avail. Instead, he gets to work on the damaged globe.

On Ladonna's birthday, she acts as if it was a normal day, but she is still annoyed when everybody else does the same.

At school, Mr. Ratburn offers congratulations, but he means Arthur, who gets to present his website to the class.

After school, Ladonna meets Buster, who wants to repair the treehouse, but seems to be clueless about how to do it. Ladonna offers to help Buster and walks straight into a surprise birthday party for herself. Even her dad manages to join them for a short time. When Brain walks to the party, he is scared by the wind in the trees, but he does his breathing exercises and overcomes his fear. He gives Ladonna the globe, which now says "Happy Birthday Ladonna."

Several weeks later, the ice cream shop is reopened and many kids attend. Kaylie has adopted the dog from the broadcast Arthur saw. Bud still tries to convince Ladonna that he can read minds, and Brain and Dr. Paula have smoothies. 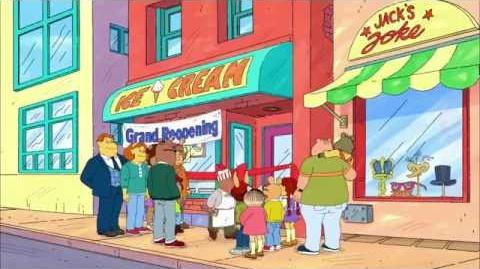 ARTHUR Shelter from the Storm Premiere 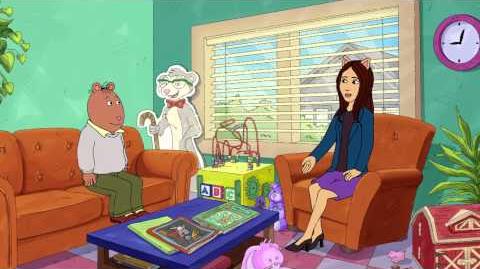