"Sleep No More" is the first half of the seventh episode in the fifth season of Arthur.

Buster believes it's his destiny to go to Pizza Paula's Pizzaland and win the pizza-eating contest for free pizza for life. While he is there, he goes back to the hotel room to sleep early for the pizza contest, except he can't fall asleep.

At a lecture, Arthur introduces Buster about a special subject he knows all about. Buster then starts his lecture about sleep. He begins to show clips of him asleep and talks of how important and helpful it can be. He says that it replenishes our strength so that we are physically fit: a clip of him is shown where he leaps to block a shot into the goal while he is sleeping. He says that sleep rests our brains so that we are mentally fit: Buster is shown snoring in class while Mr. Ratburn asks who knows the sound a wild boar makes. And Buster says sleep also saves energy for the important things in life. He brushes his teeth, then goes to bed. As Buster ends his lecture, it appears he has also fallen asleep. Arthur returns as he teases the second part of Buster's sleeping lecture series: eating after sleeping.

Arthur, Muffy, Francine, and Brain are watching a space TV show about an astronaut who claims landing on the moon was his destiny. Arthur asks them if they wondered what their destinies are: Francine wants to be an Olympic gold medalist in hockey, the Brain wants to discover the origin of the universe, and Muffy wants to be the world's most glamorous fashion designer and end world hunger. Seeing Buster asleep on the couch, they all agree Buster's destiny will probably be as a mattress tester. It's then they see a commercial for a grand opening of a pizza theme park called Pizza Land, which happens to wake Buster up. The woman who created the theme park then announces their first pizza eating contest, where the prize is a lifetime pass to all her pizza restaurants.

Buster tells his mother about Pizza Land and that he would be great at the contest, but she says no. Buster explains to her, but she tells him that they do not have the money for a hotel. Buster tries to do as many jobs around the town, such as mowing Mr. Sipple's lawn, babysitting the Tibble twins, washing cars at Crosswire Motors, and selling his own lemonade. He sleeps on every single job, and manages to make only a few cents. Buster's mother commends him for trying hard, but is about to say that he didn't make enough money for a hotel. His mother then gets a call from Pizza Land because Pizza Paula wants every newspaper editor to cover the grand opening. The accommodations include travel expenses, free pizza, and a free Pizza Land Hotel suite. In addition to all of those things, Buster is now able to enter the contest. Buster invites his friends to come with him to Pizza Land.

At Pizza Land, Buster is especially in awe of the park, and even picks up the Pizza flavored sidewalk to eat it. Buster goes to sign up for the pizza eating contest, showing his skill to other worried participants eating a free pizza with one bite. Later that night, Buster goes to bed early so that he will be prepared for tomorrow's contest. Buster's mother and his friends go to see a laser show, and some hours later upon returning they see Buster awake and pacing around the room. He cannot stop thinking about pizza because of the contest and the room's pizza decor, but Arthur says it could be because Buster tried to go to bed so early. Buster tries to go to sleep again with his mother's sleeping mask and earplugs, only to dream about pizza and wake up while everybody else is fast asleep.

Meanwhile, Arthur is having a dream where D.W. brings him breakfast in bed, cleans his room, and reads off a long list of other things to do for him. Arthur gets confused when D.W. is counting down. It turns out to be Buster counting down to the contest, which wakes Arthur and everybody else up except Buster's mother. He quickly goes to sleep after Brain shows him some math equations, but it only lasts for a few seconds because he dreamed it was time to go to lunch. Francine then gets him to exercise, only to make him hungry. Muffy gives him her bed saying that a proper one is the only way to get a good night sleep. Muffy can't fall asleep, and demands for her bed when she sees Buster eating chips. Binky suggests that Buster punches his pillow so that he thinks about his hand hurting instead of thinking about not falling asleep. Francine then gets Arthur to think of a solution: he suggests counting sheep, only for everybody to find it lame and cliché. Buster suddenly falls asleep to everybody's delight, and everybody else also goes back to sleep. Arthur's dream resumes, where D.W. is destroying all of her Crazy Bus stuff and ready to destroy all her Mary Moo Cow stuff as well. Buster wakes him up again, saying that counting sheep subsequently made him think about pizza again. Arthur gets angry, refuses to help and goes back to sleep. Buster decides to call room service for a pizza; the person on the other end suggests coming down to the kitchen for food.

In the hotel kitchen, the head chef mistakes Buster for a chef. Buster tells him that he could not sleep and just wanted a snack, only to be surprised to see some of the other participants cooking their own pizzas. They recount stories of failed eating contests and not getting any sleep, but continue to do these contests because they are their destiny. Buster tells them that there will always be another contest if they are unable to win this one. They don't care and want to get back to work. Buster climbs on top of a stack of flour and goes to sleep.

On the day of the contest, everybody except Buster is either asleep or in a daze. Buster is confident and ready to start eating. Unfortunately, Pizza Paula herself was up all night because of the contest and postponed it until the next day so everybody can rest up for the contest. Since it has been established that nobody can sleep, it suggests that Buster is going to be there for a very long time. Buster himself gets upset all over again and can't sleep. Also, he is unable to get any response from his friends this time. 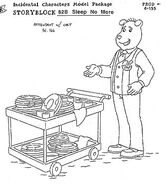