The snowball is an item owned by D.W. Its origins are seen during a flashback in "D.W.'s Snow Mystery" (which is later shown to take place during the "The Blizzard").

After the blizzard in "The Blizzard," D.W. and her family play outside in the snow. D.W. describes it as the "best day ever", so she decides that she needs something to remember it by. Mrs. Read places the snowball on a plate and puts it in the freezer. D.W. is very attached to the snowball and cares for it through the summer, but then all of a sudden the snowball disappears. She frequently accuses her brother Arthur as the snowball thief, especially whenever D.W. (or, in one instance, Francine) needs an excuse to make Arthur look bad or try to force a confession from him; he maintains that he has no idea what happened to it.

Nobody actually knows what happened to the snowball. There have been several theories as to its disappearance, but it has been strongly indicated on at least two instances that it was in fact stolen by aliens (whether this is a merely a throwaway joke or not is unclear). At the end of "D.W.'s Snow Mystery," aliens are in their spaceship sampling the snowball (thinking that it's human food), and one of them says, "I told you they would never figure it out". At the end of "Return of the Snowball," two completely different aliens, both adolescents, are indicated to have stolen the snowball, much to the dismay of their father. These two completely different depictions of this alleged explanation may be further indication that the alien explanation is in fact a joke, further deepening the mystery behind the snowball's disappearance.

Furthermore, in "Through the Looking Glasses," Arthur throws away a snowball-shaped object into a trash can, which D.W. proceeds to take out and look at. It is unknown if this is her snowball, or if it is another fabrication of Arthur's intended to end D.W.'s frequent nagging. The episode's video description on PBS airings refers to the object as a snowball.

In "All Will Be Revealed!", it is revealed that Nadine took the snowball to prevent alien trolls from stealing it and did not put it back because she was afraid Arthur would steal it. 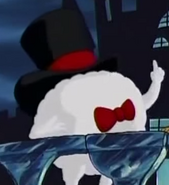 D.W.'s imagined snowball character in "Return of the Snowball." 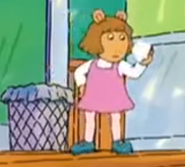 Possible snowball appearance in "Through the Looking Glasses."

Nadine is revealed to be the snowball thief

The mystery is solved