Spooky Poo is a fictional television show. Mr. Ratburn brings VHS tapes of it to the Reads' house when he stays at their house in "The Rat Who Came to Dinner." The show was an older show, as Jane Read says she hasn't seen it since she was ten years old. The show is a parody of Scooby-Doo and features parodies of the five main characters.

A ghost from the opening sequence

A scene from an episode of Spooky Poo

Some of Mr. Ratburn's tapes of the show 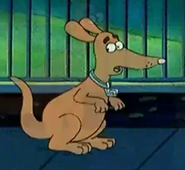 Spooky Poo, a parody of Scooby-Doo. He is a kangaroo instead of a dog.

Mr. Ratburn's Spooky Poo T-shirt
Add a photo to this gallery
Retrieved from "https://arthur.fandom.com/wiki/Spooky_Poo?oldid=411495"
Community content is available under CC-BY-SA unless otherwise noted.