Stanley, briefly Chico[1] (named by Vicita) is Arthur's teddy bear. His grandmother gave it to him on his third birthday (seen in a flashback). Arthur once let D.W. borrow him when her Blankie was missing.

In "Desperately Seeking Stanley", Arthur's mom finds Stanley laying on the floor and sees that he is falling apart. She threatens that if she has to sew him up one more time he will become the dog's new chewtoy. She agrees to sew him up. Arthur is then confronted by D.W. who makes fun of him for still having a teddy bear (and would probably enjoy the sight of Stanley as a chewtoy.) Arthur finally gives him up in a garage sale to Vicita. She decides to name him Chico, but later on, she trades him for a sticker to the Tibbles. Arthur worries, thinking the Tibbles would de-stuff and destroy him. He discovers that the Tibbles actually gave it to their grandmother, and she patched him up. Arthur tells her she can keep it, but then he runs back and reclaims him saying "Actually, I think I'll keep him for this weekend." Arthur states that he will keep the bear only for the weekend.

However, in "Francine & the Soccer Spy", Francine tells the group, "Don't tell these secrets to anyone." She then proceeds to tell each member an example, and when she comes to Arthur, she states "not even your teddy bear." Arthur then wiggles his glasses, saying "I don't have a teddy bear." However, since he wiggled his glasses, he is lying, as D.W mentioned before; this means Arthur actually has a teddy bear in his possession.

Arthur could not have gotten another teddy bear because the only way that Francine could find out about a new teddy bear is if the scene where he got the new teddy bear was shown to us as well; since this scene was not shown and there is no further evidence that Arthur returned the teddy bear to Ms. Tibble, this means, in fact, that Arthur actually kept Stanley instead of returning him. 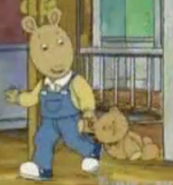 Stanley in the box. This was given to him by Grandma Thora.

Stanley being taken in a box out to the garage sale by Arthur.

Arthur as a younger child, sleeping with Stanley during a thunderstorm.

Stanley at Grandma Tibble's house, where she cleaned Stanley up and outfitted him with a blue coat.

Retrieved from "https://arthur.fandom.com/wiki/Stanley_(teddy_bear)?oldid=401389"
Community content is available under CC-BY-SA unless otherwise noted.