"Tales of Grotesquely Grim Bunny" is the first half of the fifth episode in the fourteenth season of Arthur.

Arthur dislikes the scarier comic books stocked by the local comic-book store since it changed ownership.

In the introduction, Arthur reminisces how he got his first comic book at Meteor Comix before he could even read. When he was six, he bought his first comic with his own money. And in the present day, he watches D.W. buy her first comics.

Arthur, Buster and Fern look at comic books at Meteor Comix. Freddie K. introduces them to his cousin Gerald who will be taking over Meteor Comix, since Freddie K. is retiring.

When the kids visit the store again, it looks very untidy and focuses on creepy comics for older kids. Gerald is not an attentive salesman, so the kids have to search for their favorite comics. They find a “Grotesquely Grim Bunny” comic instead. Fern likes it immediately, while Buster thinks it is “creepy-cool”. Arthur, however, is creeped out. Since the comic is expensive, Fern suggests buying it together. Arthur reluctantly agrees.

At school, Fern talks about the comic, which gives Arthur a creepy fantasy. Buster claims he has finished the comic and gives it to Arthur. Binky wants to read it next.

Arthur tries to read the comic at night, but he is too scared. He dreams that Grotesquely Grim Bunny takes him to his creepy underground world, where he meets his friends, none of whom are scared at all. Arthur desperately tries to escape and wakes up. He puts the comic in a shoebox and goes back to bed.

The next day, Arthur discovers that Pal has chewed up the comic. When Binky wants him to tell what happened, he admits that he was too scared to read it. Buster admits that he did not read it either. Fern offers to tell Binky the plot, but he chickens out. The kids agree that they want Freddie K. back.

The kids hold a protest rally outside Meteor Comix. Gerald ignores them, but Freddie K. sees the protest and some time later the store is back to normal. It now has a section for "creepy stuff," which is frequented by teenagers and by Fern. Arthur and Buster, meanwhile, are happy to find their favorite uncreepy comics. The episode ends with Arthur sitting on Grotesquely Grim Bunny’s throne as the Guardian of Meteor Comix. 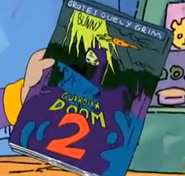 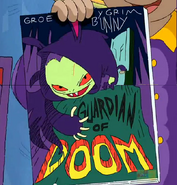