Arthur Wiki
Register
Don't have an account?
Sign In
Advertisement
in: Arthur episodes, Season 3 episodes, Episodes with songs,
and 2 more

The Ballad of Buster Baxter

"The Ballad of Buster Baxter" is the second half of the first episode in the third season of Arthur.

Art Garfunkel lends his voice and likeness to the guitar-strumming moose minstrel who sings "The Ballad of Buster Baxter" -- the story of how Buster feels when he comes home to Elwood City. It seems to Buster that, not only have his friends changed while he was gone, but they've forgotten all about him! Will he ever fit in again?[5]

The show begins with Arthur and Buster playing checkers while enjoying the cake Mr. Read made to celebrate Buster's return. Buster is remarking how good it is to be back home when the Brain arrives. Arthur reveals that while Buster was gone, he and the Brain started a checkers tournament, and are scheduled to finish the remaining games. They try to let Buster join, but find it impossible to play with three people. Buster agrees to just watch, content to be with his friends again.

The next day, Buster is surprised to find Arthur and the Brain remaking the story he and Arthur were writing before he left. He is shocked to find that on Brain's advice, they removed all of the fantastical elements that the Brain found to be "unrealistic" and "illogical", making it much less exciting than what he and Arthur had written. Despite this, Arthur insists that Buster help to finish their project. He suggests a scene with pirates riding dinosaurs crushing buildings, but the Brain finds it too unrealistic and suggests that the pirates ride horses and crush flowers instead. Buster is disappointed in how their project turned out while he was gone.

Later, Buster sees Arthur and his friends leaving the movie theater. Buster is disappointed that Arthur went to see "Carpet of Doom" without him. However Arthur reveals that he went to see "Kresblain", a series that Arthur and Buster used to hate. He says he caught "Kresblamania" and that all his friends are in a Kresblain fanclub. Buster still hates Kresblain, so he feels left out and leaves. His friends however think Buster feels he is above them because of his travels.

The next day, at school, Buster's friends think he is a snob and don't want him to sit with them at lunch. They suggest that he now likes sophisticated foods like snails that are not what the "normal" kids eat. Later, Buster finds out that his friends learned to square dance while he was gone. He can't get the steps right and keeps tripping and knocking people down. Embarrassed by his failure, he leaves and is again accused of acting like he is above them.

Buster feels left out as he sees all that he missed while he was away, and feels isolated as his friends refuse to hang out with him. He confides to Sue Ellen that really very little changed while he was gone, and still enjoys all the things he did before he went on his trip. He then offers to play checkers with Sue Ellen, but she doesn't like to play it, leaving him feeling dejected again.

Meanwhile, Arthur and his friends now seem convinced that they have nothing in common with Buster now, and question whether he is truly their friend anymore. Arthur however suggests that they should learn more about all the landmarks Buster saw, suggesting that maybe they would also like it if they just gave the idea a chance.

Buster's friends plan to celebrate him a party, but Buster doesn't come. They think he doesn't even want to be their friend anymore. Meanwhile, Buster is feeling sad and lonely at home and can't even enjoy watching TV. His friends then realize that they forgot to invite him, so they go visit him. They look through his vacation pictures at the party and Buster is glad to be having fun with his friends again. He says he was beginning to think that space aliens had replaced them all with robot clones made to make him feel sad, to which everyone agrees he is still the Buster they all know and love.

Art Garfunkel sings the last part of his song to the viewers, only for Buster and Arthur to notice him and realize neither knows who the singing moose is. Arthur goes to tell his mother while Art walks off into the distance.

Buster's friends throw him a party

Mooom! There's a singing moose in front of the house! 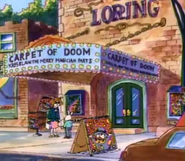