"The Big Dig" is the second half of the ninth episode in the fifth season of Arthur.

After Grandpa Dave shows them a secret map, Arthur and D.W. hunt for buried treasure and learn some family history.

Arthur and D.W. anticipate one of Grandpa Dave’s rare visits to Elwood City. Both kids have fond memories of romping around with him.

A week later, Arthur and D.W. are frustrated because Dave spends most of his time sleeping and he cannot manage the stairs, so he sleeps on the couch and the kids cannot watch TV. Dave hears the kids complain to their mom and gets sad.

Arthur tells Buster that playing checkers with Dave is boring, because he keeps dozing off. Back home, he and D.W. try to get out of playing checkers, but cannot think of an excuse. While playing checkers, Dave “accidentally” drops a piece of paper which has a map on it. Dave tells the kids about his ancestor, the pirate Blacktooth, who hid a treasure near Elwood City but could not find it when he came for it later. Dave wants to go looking for the treasure as soon as he feels better. Both Mrs. Read and Dave are glad that the kids find their grandpa interesting again.

D.W. wakes Arthur at night. Arthur dreams of buying his own Wonderworld with the treasure while D.W. dreams of getting winged unicorns. They decide that waiting until Dave feels better will take too long.

At breakfast, the kids ask Dave what the map looked like, then they search Dave's laundry and the living room. Arthur finds the map between the couch cushions.

Arthur makes D.W. swear and oath of secrecy, then they open the map and see that the treasure is supposed to be buried near the treehouse. Following the map, they walk twenty paces from the treehouse and start digging.

By sundown, D.W. has fallen asleep and Arthur has dug a deep hole, but not found anything. Dave finds them and confesses that he had drawn the map. He had intended to hide some candy for the kids to dig up, but they were too fast for him. The kids are offended.

Later that evening, the kids are still mad at Dave. To appease them, Dave gives them a compass which was passed down by an ancestor named Matthew who was a sailor. Dave then starts telling a story of how Matthew and his crew survived the storm of '88 playing checkers on a small boat. Arthur and D.W. hang on his lips. 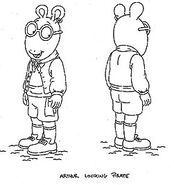 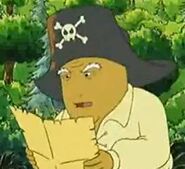