The Boy Who Cried Comet

"The Boy Who Cried Comet" is the first half of the fifth episode in the sixth season of Arthur. It was later adapted into the book Arthur and the Comet Crisis.

Buster uses Muffy's new telescope in an effort to prove that the UFOs he has been seeing are real, but discovers something even more frightening: a comet headed straight for the Earth!

Arthur walks through a desolate area. He tells the viewers to imagine they could go to another dimension where teachers are aliens (Mr. Ratburn appears and pulls his mask off, revealing he was an alien), principals who are robots (Principal Haney appears as a robot and explodes) and more UFOs than stars in the sky. He then concludes the intro, saying "Your next stop, the Buster Zone."

The Boy Who Cried Comet

Arthur and Fern are at Arthur's locker when Buster rushes up to them, saying that something is happening. They go over to the ice cream parlor, where Buster explains that he saw a fleet of UFOs the night before. Brain debunks this theory, saying that it is crazy.

Determined to prove him wrong, Buster (along with Arthur) sets up a telescope that was borrowed from Muffy and looks through it. One night, after several failed attempts, Buster discovers a comet. He soon finds out that a comet is expected to hit Earth in 37 days. Later that night, he dreams about a comet hitting Earth after Bionic Bunny fails to stop it from doing so.

The next day, Buster tells Arthur about the comet as well as a few other kids, but they pay no attention. Buster then turns to Brain, who reluctantly agrees to see if Buster's findings are correct.

At the treehouse, Brain confirms that Buster was right, confirming that a comet is actually bound for Earth. As the others run around screaming, Fern steps on a screw and finds out that it was missing from the telescope. The next day, Fern explains to Arthur and D.W. that the missing screw was the reason why the readings were wrong. Buster and Brain show up with newspapers that talk about Buster's comet discovery.

In the end, it is revealed that there is an alien director and that the kids are actually portrayed by alien actors. 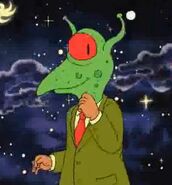