The Boy with His Head in the Clouds

"The Boy with His Head in the Clouds" is the first half of the seventh episode in the sixth season of Arthur.

George is smart, but he sometimes has trouble reading and writing. With the help of others with dyslexia, he discovers that there are many different ways to learn.

The episode starts off with Arthur talking to the viewers about how it would be cool if they could go inside of somebody's mind to see what they were thinking. First, he imagines that he goes in Mr. Ratburn's mind, where all things that are fun have to have the fun removed. He then imagines that he goes into George's mind, and his mind can't find the meaning of a simple word.

The Boy with His Head in the Clouds

Mr. Ratburn announces to the class that they will have a quiz. While Mr. Ratburn was reading the word problem, George dazes off and imagines that he is sitting on clouds with two crows. Mr. Ratburn interrupts his daydream by saying "Well George, I'm still waiting for an answer." He answers "1" because that was the number on Binky's shirt. Mr. Ratburn said that was correct, and asked him to tell the class how he got that answer. He said he just guessed. Mr. Ratburn tells them to read a history chapter.

George gets home and he is interested in it, but he has trouble reading it. Almost all of the words come out as gibberish. He gets help from his father, who doesn't yet know he has dyslexia. He then goes to the Tree House, but they are playing a trivia game. When it comes to be George's turn, everything he reads sounds like gibberish. He gets mad when Buster asks him "George, can you read?"

George goes back to his house and talks to Wally (himself.) He chooses that he will try to be like Binky. He goes to Binky and asks him how to become tough. Binky attempts to teach him insults, pushing, and making rude noises. He fails at all of these things because he's "too nice."

The next day at school Mr. Ratburn asked George if he had ever been tested for dyslexia, because Mr. Ratburn had a hard time reading his paper. He gets worried about it, but Mr. Ratburn tells him that it is not dangerous. Mr. Haney also has dyslexia (he has a poor sense of direction, a common sign of it.)

The next scene shows George's dyslexia timeline. He goes to a speech pathologist, Mr. Haney helps him read a book about Da Vinci, Mr. Haney takes him to a flight museum, and George does woodworking with his father.

The gang is worried about George being sent to a special school. George did not make his report because of his dyslexia. Instead, he built a flying machine. It does not fly, but it flaps its wings. George has a daydream, and imagines he flies the machine. He gets an A on the project. 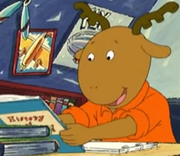