"The Butler Did... What?" is the first half of the tenth episode in the fifteenth season of Arthur.

Bailey is missing! With the help of the Baxter Detective Agency, Muffy discovers a series of clues.

At Arthur's house in the morning, Arthur talks to the viewers about how great it would be if he had a butler, like him being able to have breakfast in bed. D.W., dressed as a butler, brings Arthur his breakfast, but she isn't a very good breakfast maker. Also, she forces Arthur to wear a sombrero, a Mary Moo Cow t-shirt, and pink boots. Then she says to go to the car, only to find out that it is just a tricycle with a trailer. D.W. struggles to pull Arthur, and she says that he's heavy and that there are no more eggs for breakfast. Arthur then changes his mind about having a butler, and fires D.W. He concludes by saying that he really wants Bailey and walks away.

One morning at Muffy's mansion, Muffy rings her bell, but she realizes that Bailey isn't coming. She runs to her father and tells him that Bailey is gone and isn't in his room. Mr. Crosswire is shocked, but he reassures Muffy that he'll find a way to make it better.

In the school cafeteria, Muffy sits and wonders why Bailey would leave. Arthur says that maybe he got a better job. Muffy says Bailey was her friend. Her friends scoff. She says that he gets her everything she wants when she wants it. Francine then asks Muffy if she does the same for him. Muffy replies that she would, but he has never asked. Francine smiles and "Uh-huh." Then Muffy sobs. Buster then says that it calls for some detective work.

At the mansion, Buster investigates Bailey's room. He makes up a false explanation about what happened to Bailey, claiming that he's an alien. Muffy then kicks Buster out of her mansion.

Muffy sits in Bailey's room, feeling sad, until she sees a picture of a class on his wall that has Mr. Ratburn in it. Muffy then shows it to Mr. Ratburn, and she asks if she knew where Bailey went. Mr. Ratburn asks Muffy to describe him to help, but she doesn't have much information about him. However, Mr. Ratburn says that he probably likes music, because the picture is of Mr. Ratburn's high school band.

Muffy goes back to Bailey's room to investigate, and she finds another clue, a receipt from Sam's Instruments. Muffy goes to the place, and shows the guy at the counter the receipt. He says that he bought a jazz trumpet. He also asks if he was ever a musician. Muffy still doesn't know much about Bailey, though, but the man tells her that if he bought the trumpet, he might be planning to see Bill Abbey. Muffy then remembers that Bailey has a bunch of Bill Abbey records.

Muffy soon arrives at the venue, looking for Bailey in line. The ticket guy stops her while Mr. Crosswire confronts him. Muffy sees a car go by and sees men walking into the building. One of them look like Bailey, so she runs over, but the door closes and it's locked. She does see the men in the windows and calls for Bailey and apologizes, but it's just a bandmate with a beard and overalls. Muffy then sits in the car feeling glum.

Mr. Crosswire tells her that they will call for another butler the next day, but Muffy walks off, saying that she doesn't want another butler. She then goes to her room to suddenly find a cup of hot cocoa. Muffy runs over to Bailey's room, and sure enough, he is there. Muffy gives him a big hug, and Mr. Crosswire runs in and squeezes him, but then remembers that he should be angry with him for leaving. Bailey then reminds Mr. Crosswire that he had made an agreement for him to go on vacation. Mr. Crosswire then remembers, and leaves the room. After Muffy sees Bailey again, she then asks him about how he liked being in a jazz band. Bailey replies that he isn't that good, but for the good of Muffy, he plays a song for her on the trumpet and the episode finishes. 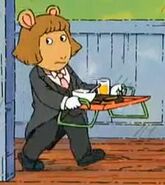