The Case of the Girl with the Long Face

"The Case of the Girl with the Long Face" is the first half of the third episode in the eighteenth season of Arthur.

Fern's been feeling low and no one can figure out why. Luckily, Buster Baxter is on the case! He'll leave no stone unturned, no lead unexplored, no ice cream uneaten...[4]

Virgule Watteau (Fern) and Bastings (George) are solving another case, finding out who stole the paintings from the Louvre, replaced with Eiffel Tower with a giant baguette, and let the animals out of the zoo. However, Fern is too sad to solve a case. George asks why she's sad, but Fern responds that she doesn't know. George asks who can help him find out why Fern is sad, and Buster answers the door.

The Case of the Girl with the Long Face

George explains that Fern hasn't smiled in a week. After asking how many antennae Fern had sticking out of her head (none), Buster is able to deduce that Fern was not replaced by an alien. Buster also uses his mom's old tape recorder to record notes.

Buster observes Fern eating lunch alone, returning library books without getting any new ones, and not appreciating poetry. Mr. Ratburn temporarily confiscates Buster's tape recorder for talking into it during class.

At the Ice Cream Shop, Buster talks to Brain and tells him what's been going on. Brain suggests that he questions Fern's friends, and Buster decides to start with Brain. Buster guesses that he gave her "a bad batch of jimmies," but Brain points out that his shop got an A from the Ice Cream Authority. Brain that says that he saw Fern arguing with Muffy a few days ago.

After a limo ride, Muffy takes Buster to the clothes shop and makes him hold her shopping bags (as Bailey sprained his elbow). Buster interrogates Muffy, and she explains that she got mad at Fern for wearing a lavender hair bow and stealing her style. Muffy apologizes and gives Buster a set of different-colored bows for Fern.

George doubts that Fern is sad because of the argument with Muffy, as it doesn't sound like something she'd be sad about. When they talk to Fern, she says that she forgot about their argument and still feels sad.

Buster and George then have a stake-out at Fern's house. They see Fern running away from a figure, and start chasing after them. The figure turns out to be the Grey Dove (Binky), who says that he was just jogging and advised Fern to exercise to help with her mood. Binky says that if he was making Fern sad, he'd write an apology note.

This gives Buster an idea. He places an apology note on Fern's locker, but doesn't sign it, thinking that whoever she thanks for it is the culprit. Fern goes to Mr. Ratburn, and George and Buster trip over a bucket while trying to run away.

Fern starts feeling better, explaining that sometimes she just has bad days for no particular reason. She then gets an idea for the end of the Virgule Watteau story, saying that heavy rain eroded the locks on the zoo cages and the animals freed themselves.

Buster himself starts feeling sad, and he goes to Brain's ice cream shop once again. 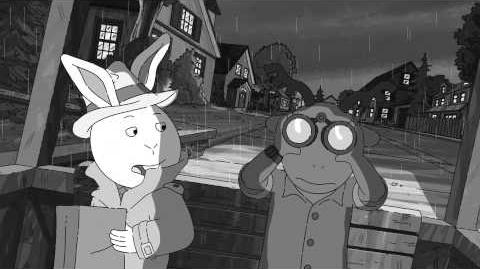