"The Election" is the first half of the sixth episode in the fifth season of Arthur.

Mr. Ratburn announces a class election to the third grade.

At recess, Muffy, Francine, Arthur and Brain discuss the announcement. Francine thinks she would be a good fit for president, but Muffy rightfully suggests she would be better as her campaign manager behind the scenes after detailing responsibilities of being able to campaign and listening to the people while Binky thinks it's lame. Buster suggests to Arthur that he would be a great candidate only to get openly laughed at by Muffy.

Back in class, Muffy declares to the class that she is officially running. Buster again encourages Arthur to run as a candidate, which gets cheered on by some of his class members and he finally agrees, much to Muffy's annoyance.

During lunch, Arthur, Buster, Binky, and Brain try to think of a reason why anyone would vote for Arthur. Brain tells Arthur he needs organization with professional and well-financed people. Buster reassures Arthur to relax and tells him all he needs are a few good jokes, which he can help with. On the flip side, a very well-organized Muffy has set up a strategy meeting with Francine and Sue Ellen. She wants catchy slogans from Sue Ellen, and to make an appointment for her hairstylist, and Francine to find some hot button issues.

Mr. Ratburn uses Thomas Jefferson, Herbert Hoover, and Teddy Roosevelt as examples of not being about personalities, but about important issues. Muffy, Buster, and Binky daydream about themselves as these historic figures.

Arthur, at the end of the school day, asks Francine if she wants to go to The Sugar Bowl, only to be dragged away by Muffy, who doesn't want her talking to "the enemy." At home, Arthur talks to Buster about how seriously Muffy is taking the class election. D.W soon walks in with concerns about Arthur not being able to win because he isn't funny, and he hasn't campaigned hard. She also points out that Arthur hasn't decided on his campaign colors yet, which she first suggests should be yellow and blue, but then decides that would be boring and suggests pink and white instead. Arthur stresses to her that it's just a small class election.

The next day, Arthur and Buster walk into school the next morning to see Muffy's campaign posters all over school, and she is personally handing out muffins and buttons. This makes Arthur urgently create his own posters, with crudely drawn and loose cutouts, which Muffy laughs at. Arthur says that her comment isn't being fair, and she exclaims that politics aren't fair.

A debate is held between the two candidates. Arthur talks about teamwork, organization, and problem solving together as a positive for his election. Muffy details that she will be able to get her Daddy to pay for everything. Mr. Ratburn then notices that Binky had fallen asleep, which the class finds funny. When awoken, Binky says it would be more exciting if there was no more homework and the class could eat snacks while working. The class's excitement for his comments prompts Mr. Ratburn to ask Arthur and Muffy if they would allow Binky to be added to the ballot. Muffy disapproves of this, but Arthur supports it.

After the votes have been counted, Mr. Ratburn announces Binky as the winner and dismisses the class. However, Binky doesn't understand the concept of a mockup election and keeps pushing for more promises to be implemented. Muffy yells at Arthur for letting Binky run, telling him that she spent the most money and gave out muffins, and the result wasn't fair. She storms off to the hallway, saying that she won't ever forget this event. Arthur and Buster hope she never loses a real election. 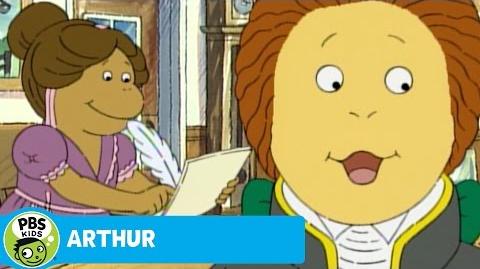 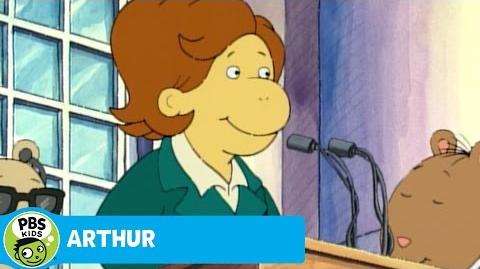 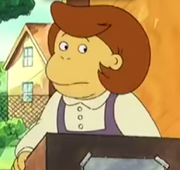 A photo of Teddy Roosevelt in Mr. Ratburn's class