"The Friend Who Wasn't There" is the first half of the second episode in the eighteenth season of Arthur. It was later adapted into the online game Waldo Loves Muffy.

Muffy embarks on an epic quest to find her long lost imaginary friend. But she has to be careful—the Crosswire basement is full of bewitched boxes, gadgets, and dolls...oh my![4]

Later, Muffy asked Bailey why she didn't have any imaginary friends when she was growing up and what was wrong with her imagination. Bailey told her that there's nothing wrong and that she always comes up with the most imaginative ways to spend money, in an attempt to comfort her. He also mentions that she had an imaginary friend named Oswald, which Muffy does not recognize the name. He takes Muffy to the basement to find any evidence of her imaginary friend. All of Muffy's life is organized in boxes by age in the basement. As they start the hunt, Bailey gets a phone call, saying he is needed in the kitchen. Muffy tries to pull out a box, only to knock the box down. Suddenly, a stuffed elephant jumps out of the pile, excited to be free. Muffy tells him to get away because he smelled like sardines and old socks and asks him who he is. The elephant replies that he's Muffy, but Muffy interjects, saying that she is Muffy. Waldo was disappointed that Muffy was already taken and asked her what name she would give him. Muffy replies that he's not Oswald and that she would never have a stinky imaginary friend. The elephant explains that he's been living in a box for years and asks where they are going. Muffy tells him "they're" not going anywhere because she's looking for pictures of Oswald. The elephant is sad since she's always talking about Oswald. Muffy asks him if there's anything to do besides following her; in which he says he can go run and hide. She learns about Pretty Penny, a giant doll similar to Barbie who hunts down escaped toys and puts them back in their boxes. Muffy finds D.W. and her friends dressed as characters from the Wizard of Oz (D.W. is Dorothy, Pal is Toto, Arthur is the Tinman, Buster the Scarecrow, and Francine the Cowardly Lion). As the group laughs at her for looking for "the great Oswald", saying she has no imagination (as Oswald is only friends with imaginative people), the elephant comes to her defense and says Muffy is very imaginative The group leaves, and Muffy thanks him for standing up for her. He says it's what friends do, and both the elephant and Muffy pay a visit to Oswald. He turns out to be an evil computer screen who has taken over Oswald and her imagination. The Great Oswald show her memories of when she was little and with an imagination. One is of her at about four eating cereal and another bowl beside her. She exclaims to her father that her imaginary friend is eating cereal with his nose and tries to copy him. Ed looks up from his paper and smiles. Oswald shows what happened to her imagination- her being spoiled with gifts and technology took away the imagination she once had. Pretty Penny appears behind her and Waldo and grabs Muffy. As she takes Muffy off to be put in a box, the Elephant tries to rescue her, but is knocked away. He swears that he will find her. She then wakes up amid fallen plushies, as it was all a dream. Bailey returns and says she found the correct box. Among the pile of plushies is a picture Muffy drew when she was four of her imaginary friend. Bailey now remembers- her imaginary friend's name was Waldo, an elephant- the same elephant who was following Muffy. Muffy talks to the picture, realizing that he was her imaginary friend all along and apologizes for calling him stinky. Bailey thinks shes talking to him and sniffs himself.

Later, she tells Arthur about Waldo. Arthur then gives her a game console, but Muffy says that she wants to go for a walk, and asks if Arthur can play on his own. As they walk down the street, Muffy tells Waldo that he's getting a bath, but Waldo objects, saying it's his cologne, pachyderm; all the elephants are wearing it. D.W. and Nadine are looking out the window. D.W. asks who Muffy is talking to due to the fact that she cannot see Waldo. Nadine, being a fellow imaginary friend- therefore being able to see Waldo, tells her Muffy is catching up with an old friend and waves to Waldo 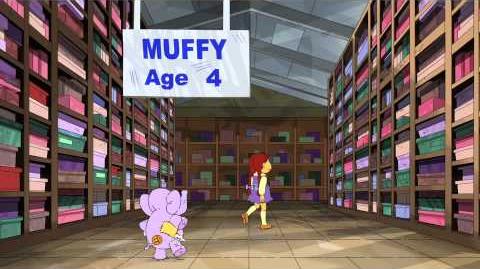 Retrieved from "https://arthur.fandom.com/wiki/The_Friend_Who_Wasn%27t_There?oldid=382409"
Community content is available under CC-BY-SA unless otherwise noted.