"The Fright Stuff" is the second half of the third episode in the fourth season of Arthur.

Arthur, Brain, Binky and Buster are all pranked by an unidentified prankster. Brain mistakes jelly worms in his lunch for real ones, Arthur finds a fake spider in his locker and Binky finds a skull. Each prank comes with an invitation and they are invited to the library, where Muffy wears a fake tentacle and pretends to strangle Francine, which frightens them.

Arthur asks what the whole thing is about and Muffy says she's having a costume party for a new book. E.A DePoe, alias Ms. McWord, Ed Crosswire's old teacher from The Scare Your Pants Off Club, will be reading her book aloud at the party.

Muffy also says the boys will be her "extra special" guests, due to a prank the boys pulled on her on April Fool's Day. The party will be held in Castle Manor, which is supposedly haunted (which is why the party is being held there).

Arthur and the other three boys decide to turn the tables on the girls. They come up with several prank ideas centered around popular tales (The Tell-Tale Heart, The War of the Worlds, and The Legend of Sleepy Hollow), but they can't decide on which one to do.

Meanwhile, the girls come up with a prank that involves glow-in-the-dark balloons and a tape recorder in Castle Manor's upstairs library. The lights unexpectedly turn off by themselves after the girls rehearse their trick on the boys by scaring their pants off. Muffy tells Francine that she will tell her father about the lights requiring a repair.

Ultimately, Arthur comes up with a prank that involves Binky wearing a pumpkin head and crab claws and standing behind a curtain, so when the girls see his shadow (courtesy of Buster with a flashlight) making eerie sounds (performed by Brain), they will play a trick on the girls at the party. The boys agree to use Arthur's idea.

During the party, the girls make a plan about playing their trick on the boys after Ms. McWord reads her own story. The girls introduce Ms. McWord's storytelling to the party attendants. Meanwhile, Arthur tells Buster and Brain they can set up in the upstairs library (which is where Francine and Muffy are doing their prank). However, Binky is nowhere to be seen.

A child in a sheet and wearing a pumpkin shows up at the punch bowl next to Arthur, who assumes that the child is Binky. Arthur tells him to go up to the library to meet up with Buster and Brain.

The girls tell Arthur he will miss out on Ms. McWord's reading of her newest book "The House of the Jack o' Lantern", but he talks them into coming up to the library. The girls try to play their trick on Arthur, but Muffy discovers that the tape recorder is missing when Francine asks her about the wait. Suddenly, the pumpkin-head kid appears in front of them and then vanishes. Both of the girls scream as they flee from the library.

Francine and Muffy are upset and accuse Arthur of stealing their prank, but Arthur calls for the boys to come out. Buster and Brain arrive and tell Arthur that their trick has been moved to the playroom because the library was locked.

Arthur points out that their trick went perfectly, but Brain says they did not do it. Buster points out that balloons and a tape recorder (from Francine and Muffy's prank) were in there, but Francine did not move them. The pumpkin-head child appears, and Arthur asks for an explanation.

Suddenly, Binky enters in a cyclops costume. He apologizes for being late because he walked into the refrigerator and broke his pumpkin; Arthur is now bewildered. After asking "Binky, if you just got here..." Arthur turns to the pumpkin-head child and finishes with "then, who is—?"

The children run downstairs and find Muffy's dad (who is dressed like a King). They try to explain what happened, but Ed does not listen and scolds them about pulling pranks on each other. In the attic, the ghost turns out to be that of a little girl, and that she was only trying to attend the party until she got caught up in the pranks.

Her father's ghost also scolds her for pulling pranks, but subsequently says that there are better ways to have fun at the party.

The gang decides to put off their pranks for good, but joins the party with everybody else. At that moment, George gives a compliment to the girl about her costume without being aware that she is a real ghost. The ghost girl and her parents secretly attend the party by concealing their actual appearances of being real ghosts.

Part of the main room

Another part of the main room

An overhead view of the main room 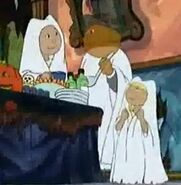