The Last King of Lambland

"The Last King of Lambland" is the second half of the third episode in the fifteenth season of Arthur.

James receives a gift from his uncle in Scotland - a toy lamb that will supposedly give its owner the powers of the legendary James the Squinty, leader of the clan MacDougal-Donalds!

James and Molly's Uncle Myles sends them a package from Scotland with a letter telling about Myles' visit to the family's ancestral castle and learning about its history. Long ago, after a succession of terrible rulers, a shepherd boy, who could talk to animals and make rain, made the kingdom prosperous again. He was crowned King James. The package includes a CD for Molly and a toy lamb for James, which is said to grant the power and wisdom of the shepherd boy.

The Last King of Lambland

In preschool, James plays with Liam who has the hiccups. The Tibbles try to cure Liam by scaring him, so he accidentally steps on James' lunch. The Tibbles make fun of James' lamb and the idea that it is magical.

At lunch, D.W. recounts events from "Hic or Treat" and concludes that a "Boo" is not enough to cure hiccups. Emily and Liam share their lunch with James. James decides to share his ruined one with some birds and a squirrel. The Tibbles see him and wonder if he can really talk to animals. When they examine the lamb, a thunderstorm comes up.

Later, the Tibbles see James take a coin out of the lamb's mouth at the Sugar Bowl and are finally convinced. They hail James as king.

The next day, Tommy takes D.W.'s crayon in preschool and gives it to James.

At the Read house, D.W. tells Emily that James is getting mad with power, like Arthur when their parents put him in charge. In her imagination, James is king and has confiscated all crayons. When Emily tells him that the people are starving, he says they should eat cake, then orders the Tibbles to step on all cakes. D.W. tries to stop him and is sentenced to cleaning out unicorn stables.

D.W. visits James who is now dressed as a king and guarded by the Tibbles. Molly believes they are reenacting fairy tales. D.W. asks James to stop playing king, but James orders Timmy to show her out.

The next day at preschool, James and the Tibbles steal juice from Maryann and bully Emily and D.W. off the swings. Emily calls James out on being mean and he looks guilty for a moment. When the Tibbles suggest stomping on Liam's toy bulldozer, James sees Liam cry and finally comes to his senses. He gives Liam back his toy and throws the crown away.

James wants Molly to take the lamb, because it made him miserable. She tells him that legends are not real and that the legendary shepherd boy was kind and generous.

James fires the Tibbles and offers the lamb to Liam. The idea scares Liam so much that it cures his hiccups. D.W. and Emily welcome James back. James asks them never to call him "Your Highness" again. 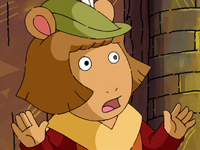 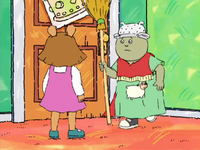