"The Long, Dull Winter" is the second half of the fifteenth episode in the third season of Arthur.

Arthur and his friends are feeling dreary, but can't put a finger on why. It eventually dawns on them that their listless feeling is a result of the fact that there have been no major holidays in quite some time, so they plan to try inventing a new one.

Arthur sits in math class and everything around him seems to happen in slow motion. He does not think he is simply bored, like when he is watching Mary Moo Cow with D.W. and Kate, so he wonders what is happening to him.

At school, Brain, Muffy and Buster confess that they have not felt like doing their favorite things lately. However, they fondly remember holiday specials on TV. That gives Arthur the idea to create a new holiday.

Buster tells Arthur, that his mom would put a good idea for a holiday in the paper.

Arthur and Buster meet with Brain, Francine, Sue Ellen and Fern in the Sugar Bowl and do a brainstorming session to find out what makes a holiday.

Arthur asks Grandma Thora about important events to commemorate as a holiday. She recounts seeing the first zeppelin reach North America, but Arthur thinks it is too boring. D.W. suggests 'Pony Day', which Arthur does not like either.

Buster suggests ‘Give Me Candy Day’, a holiday where people put on costumes and give him candy and he shares what he can't eat with little children after he gains a large amount of weight, becoming obese as a result. Francine instead suggests ‘There's Nothing to Do Today Day’, where everybody can do whatever they want.

At the library, Brain suggests 'Igneous Rock Day', since rocks last for a long time. Binky wants a 24-hour fireworks to drown out Mr. Ratburn. Muffy wants to sell T-shirts and souvenirs for the holiday.

Arthur is exasperated and calls another meeting in the Sugar Bowl. He believes that a holiday should be more than TV specials, presents and fireworks. Just then, Francine mentions her original theory that Arthur was in love. Everyone remembers that Valentine's Day is coming up and runs out to buy gifts. D.W. comes in and proudly shows Arthur an article about ‘Pony Day’ which her mom wrote for her and Mrs. Baxter put in the paper. Binky congratulates Arthur on making everybody forget the dry spell between New Years Day and Valentine's Day. Arthur is disappointed that he did not think of a new holiday, but Binky reminds him that he now has the whole year. They start planning.

"You such as annoying as my sister D.W.!" 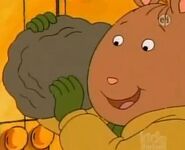 The Kid Who Got Clothes For Christmas