Start a Wiki
watch 01:48
The Loop (TV)
Do you like this video?
"The Making of Arthur" is the first half of the sixth episode in the eleventh season of Arthur.

The superstar host of a new series called Postcards from You puts out a call for homemade videos for his TV show, setting off a frantic rush among Arthur and his friends to film their lives.

During his appearance on the daytime talk show Casey Tulips, award-winning actor Matt Damon announces the "Postcards from You" contest, asking kids to send in one-minute videos of themselves to compete in a contest for best film. The winner gets to have their movie featured on TV. Excited at this prospect, Arthur chooses to enter, as does all of his friends when they discuss the contest the next day. Muffy announces that she is holding casting auditions for her video and brags that she is guaranteed to win because her Dad sold Matt Damon's lawyer's assistant a car once, so she is completely assured of her victory. Brain plans to write a short documentary on something scientific. Buster announces of making a video about Arthur, considering him to an interesting subject since he couldn't find any real aliens to feature in his film. Arthur chooses to surprise everyone with what he intends to film, and at home starts filming a video of himself, D.W. and Pal, but doesn't go too well when D.W. shows up dressed as a fairy while being filmed feeding Pal. The shoot fails when a squirrel comes in stealing Pal's food, prompting him to chase the critter around the yard. Then then try to film D.W. performing a magic show with Nadine, which also flops as neither Arthur or Buster can see her.

Meanwhile, the Brain films his video documentary at home, which studies human sneezes courtesy of George. The boys are not particularly impressed by the video, and quickly leave when Brain suggests they be his new test subjects. At George's house, they film him fixing a doll house belonging to Vicita Molina's stuffed llama Raulito in his garage. However, this backfires when George attempts to remove a wall so he can expand the house, which makes Vicita lash out at him believing him to be wrecking it on purpose. Three days before the deadline, Arthur still isn't sure what to film to surprise Matt Damon. Meanwhile, Buster continues to film everything Arthur does, much to his annoyance. Finally, Arthur gets the idea to make his film about his Dad's cooking, and at home they shoot a video of his Dad making his famous souffle. However, D.W. ruins the shot at the last moment when she dresses up as the "Sprinkle Fairy" and pours sprinkles on the souffle, causing it to deflate. However, Dad suggests to Arthur that rather than shooting the entire picture all over again that he simple edit that clip out. With Buster's help, they edit the video and make it something fun and exciting. Happy with the results, Arthur goes off to mail his video to Matt Damon, and Buster finally proclaims that he has plenty of Arthur footage to make his own video.

At the mailbox, Arthur arrives to send in his video when he runs into Muffy also submitting her project. When he learns that her video, entitled Muffy the Umpire Slayer had special effects, Arthur loses confidence in his own product, which Muffy writes off as something unworthy of Matt Damon's time. Having second thoughts, Arthur imagines Matt Damon being given a new script for a movie from him only for Matt to reject it out of disgust at the one-minute video he sent him. Matt then declares that Arthur will never eat lunch in Elwood City again, which the school readily obliges when Arthur is on the lunch line. Frightened by this thought, Arthur decides not to submit the video and tries to re-shoot it, hoping to add a little more to it. D.W. insists that the video was just fine as it was, but Arthur goes ahead with the edits he feels are necessary.

Late that night, Arthur finishes the edits and decides the video's passable enough. However, overcome with exhaustion, he absentmindedly deletes the entire video just when he was going to save it, destroying his project. Arthur panics and calls Buster for help, who thankfully has 72 hours worth of footage he needs to cut down to a minute; so he offers to let Arthur share his project with him. The two eventually complete the video and finally submit it in the mail, hoping that Matt Damon will find something to like about it.

Matt Damon goes through all of the one-minute movies submitted to him, eventually coming down to Muffy and Arthur's videos. Matt watches Muffy the Umpire Slayer with his manager, which features Muffy using a golden credit card to vanquish a vampire umpire named Vladimira, played by Francine. Surprisingly, despite the flashy special effects Matt is not impressed by the video, finding it to be outrageous and fake for a simple children's movie. He also admits that the car Mr. Crosswire sold his lawyer's assistant was not much of a bargain. Finally, they come to Arthur's video, entitled Arthur: The Story of a Kid, his Sister, and his Friends. Happy that the video doesn't sound fake, Matt watches the video.

A few days later, D.W. answers the front door and is shocked to find that it is Matt Damon standing before her. Arthur shows up eagerly asking if his video won. Matt says no however, and says that the winner was his friend George. However, Matt explains to Arthur that he wanted to stop by because he really loved Arthur's video, and offers to make it into a TV show! Matt and his crew then proceed to film Arthur running down the sidewalk with his dog Pal, resulting in the famous introduction of the Arthur series. 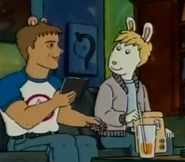 Retrieved from "https://arthur.fandom.com/wiki/The_Making_of_Arthur?oldid=387416"
Community content is available under CC-BY-SA unless otherwise noted.