The Pride of Lakewood

View source
watch 01:55
Cobra Kai Season 4 - The Loop
Do you like this video?
Play Sound

"The Pride of Lakewood" is the second half of the ninth episode in the thirteenth season of Arthur.

Sue Ellen and Brain are suspected of not loving their school because they won't join the Lakewood Pride Committee.

At a yard sale that Buster is having, James is looking through buttons and sees a button of Buster wearing a hat pointing at the viewer with the message "IF YOU'RE PROUD LIKE ME JOIN THE LPC!". Buster soon tells James the story about the LPC (though Arthur attempts to do it for him).

During a race against Mighty Mountain, Francine loses the race when her pants nearly fall off. After the game, she goes to Mr. Haney's office to ask about new uniforms and when she comes out of the office she tells Arthur and Muffy he said yes. Arthur asks Francine how he managed to convince the principal to get new uniforms and Francine tells him and Muffy that the team felt embarrassed in their old uniforms and wanted to take more pride in the school. They then create the Lakewood Pride Committee and try to get other kids to join it, to no avail.

Muffy then comes up with an idea and they then turn to Buster and want him to become the president of the LPC. Buster agrees to do it and the next day at school Buster goes in front of the cafeteria and at first is nervous telling everyone about the LPC and what it means. After a good amount of motivation and a song (a parody of "This Land Is My Land"), Buster manages to successfully convince the kids to join the LPC and everyone soon has an LPC button except for Sue Ellen and The Brain. The gang tries to get Sue Ellen and The Brain to join the LPC even offering them watches, but the pair decline and the same day Sue Ellen discovers she has a poster on her locker saying that she doesn't have any school spirit.

Later, at the Sugar Bowl, the Brain tells her that he received one, too (as did George, despite being a member, because he didn't cheer loud enough at the pep rallies). They agree to stop the LPC and the only way is through the president. They go to the treehouse where the president is and try phoning him there, but Muffy answers the phone and tells them the president is busy right now. As Buster and Binky are walking Brain throws a paper airplane with their message at Buster. Buster picks up the paper and hides it in his hat. On the day of the race, everyone is wearing the new uniforms.

Buster was going to read the paper handed to him by Muffy, but he instead tosses the paper and reads the paper underneath his hat much to the surprise of his teammates. He then tells everyone that no one has the right to tell someone they don't like the school just because they don't join any groups. After that the game starts.

Lakewood would go on to win the game and the LPC would disband soon afterwards, since the school has enough team spirit without it. After Buster finishes the story, he offers the button, but James decides to purchase the "I Like Pike" button instead. 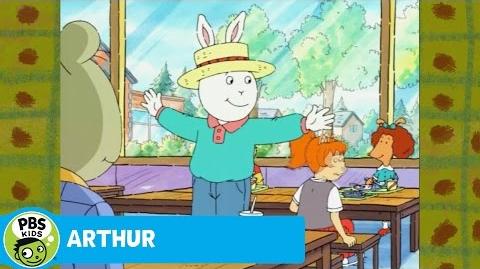 Buster manages to convince almost the entire school to join the LPC and have pride in Lakewood. 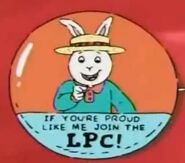 The kids wearing the new uniforms.