The Return of the King

"The Return of the King" is the second half of the ninth episode in the third season of Arthur. It was later adapted into the book King Arthur.

On a field trip to the medieval fair, Arthur's class is being humiliated in competitions against a class led by Mr. Ratburn's old teacher. Can Arthur turn things around?

The episode opens with the kids going on a field trip to a medieval fair. When they make it to the fair, Mr. Ratburn's class sees that another school, Glenbrook Academy is there too.

The teacher with them is Mr. Pryce-Jones, who was Mr. Ratburn's teacher when he was in school. Arthur notices a sword put in a stone and anyone who can get it out will become "King of the Fair," but no matter how hard he pulls, it will not come out.

Throughout the day, the Lakewood students compete with the Glenbrook students in several Middle Ages-themed competitions, losing every single one. Arthur loses at a medieval maze. Francine loses at archery. Brain fails at a trivia competition. Even Buster loses at a pie eating contest. At lunch, it is revealed that Mr. Pryce-Jones was very strict, and when Arthur, Buster, Francine, and Brain overhear Mr. Haney talking with him, they think that if Lakewood loses all of the contests Mr. Pryce-Jones will replace Mr. Ratburn.

The final event is a castle building contest. The Lakewood students work hard and build a beautiful castle, but they lose to Glenbrook because their castle is not historically accurate.

At the end of the day, the Glenbrook students and Mr. Pryce-Jones all try to remove the sword from the stone, but they all fail. Just when it is Arthur's turn, he hears the barker's reference to "a gentle hand" and suddenly realizes the secret of the sword. Just as his friends come over to get him to leave, Arthur pulls the sword out with ease. Arthur becomes the King of the Fair and everyone cheers. Mr. Pryce-Jones, who himself could not figure out the puzzle, congratulates Mr. Ratburn, declaring he taught Arthur well. Mr. Haney then explains to the children that they misread his conversation with Mr. Pryce-Jones and that he will not be replacing Mr. Ratburn, but instead will be tutoring Mr. Haney's nephew and niece (who are obviously worried about the prospect).

As they head home, Buster remarks that Mr. Pryce-Jones probably gave all his kids homework. Hearing this, Mr. Ratburn assigns the class a report on medieval times, much to their chagrin.

On the bus heading to Lakewood Elementary School...

The ending of the episode.

Arthur is crowned king of the medieval fair. 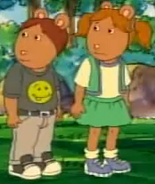 Muffy arguing with her counterpart about how the ball was too heavy to be a tennis ball.

Arthur pulls the sword from the stone!

A person trying to pull the sword from the stone.

celebration of the Glenbrook Academy 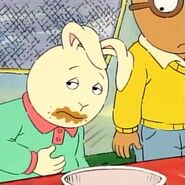