"The Secret Guardians" is the second half of the seventh episode in the thirteenth season of Arthur.

When Arthur, Binky, and Sue Ellen stumble upon a beautiful and private woodland oasis located near their homes, they vow to tell no one else and keep it as their secret spot. Before long, however, they start to find evidence of human habitation.

In the introduction, a mysterious voice magics Arthur to the treehouse and tells him to go on a mysterious journey to Elwood City. Arthur claims to know Elwood City already, but the voice shows him a bird's nest in the Sugar Bowl sign and promises wondrous discoveries in his own backyard. Just then, Arthur is woken up by a call from Sue Ellen.

Sue Ellen wants to test a boat model with the help of Arthur and Binky. The boat accidentally floats down the creek and the kids run after it. They discover a beautiful part of the woods with butterflies and a spot for bathing. They play there for several hours. Sue Ellen does not find her boat, but she finds what she believes is an arrowhead. The kids call the spot Arsubia (after the first letters of their names) and swear not to reveal the location to anyone.

Arthur almost tells Buster about Arsubia, but Binky stops him. He almost betrays the secret again when he paints Arsubia in art class.

Sue Ellen checks a library book on arrowheads. She imagines presenting her arrowhead at the Exploration Club as evidence of the Arsubian tribe, but she is thrown out because she has no other evidence.

Sue Ellen comes back to Arsubia to study plants and collect more artefacts. She makes a notebook with her findings. When she leaves, she forgets a bag of sunflower seeds.

Later, Arthur finds the bag and calls Sue Ellen and Binky to the Sugar Bowl. Sue Ellen admits doing research. Arthur and Binky are irritated, because they think she will tell the secret. Binky steals Sue Ellen's notebook. When Buster joins them, the other kids quickly leave.

When Arthur and Sue Ellen visit Arsubia the next time, they find that Binky has set up a gate and demands passports. While they bicker, they see Sue Ellen's boat on a wooden stool. They wonder if the Arsubians are still around, but it turns out that Buster has put the boat there. He and his dad discovered the place when he was four and named it Baxteronia. Buster is happy to share it with his friends. Sue Ellen is disappointed, but Buster suggests that there might be a lost civilization, because he found a conch shell and does not know where it came from. When a thunderstorm begins, he leads the others to a cave which they had not yet discovered.

The name written in the sand. 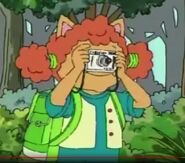