The Sugar Bowl is a dessert parlor in Elwood City owned and run by Carl Manino,[1] and is one of the kids' central hangouts where Arthur Read and his friends go to. It serves candy, ice cream, milkshakes, and other treats and is somewhat competition for Mrs. Powers's Ice Cream Shop. Despite this, Brain still eats at the Sugar Bowl without his mother's objection.

The Sugar Bowl has existed for at least 50 years. In Carl Manino's flashback from Sue Ellen Chickens Out, the Sugar Bowl was seen in the 1950's; however, Carl likely did not own it then, as he was seen as a bus boy mopping the floor. It was one of the main hangouts of high schoolers that attended Elwood City High School (one of them being Grandma Thora) and was decorated with pennants, records and posters on the walls. It also had a jukebox.

In "Sue Ellen Chickens Out," Carl Manino considers selling the Sugar Bowl to Chickin Lickin' where it would be turned into another one of their restaurants. Sue Ellen rallied her friends to protest against Chickin Lickin' to save the Sugar Bowl, but few of them had the desire or courage to stand up for its survival. By the end of the episode, Carl chooses not to sell it because he found that he and his customers still loved it.

In Season 11 onwards, Carl Manino, the owner of the Bowl, does not appear in the Sugar Bowl. This is possibly because he has retired and left his employees in charge of running the Bowl.

During Buster's dream in Buster's Second Chance, the Sugar Bowl is shown to be abandoned and taken over by the Tough Customers.

In an alternate future in "D.W. and the Beastly Birthday," the Sugar Bowl becomes the "Sugar-Free Bowl."

In "How the Cookie Crumbles," it is shown that the Sugar Bowl hosts the annual baking competition for the annual Strawberry Festival in Elwood City. Muffy is a regular in this competition, having won twice so far. She won her second victory with her "Scrumptious Snackeroodles" which she and her friends made together, and now the Sugar Bowl sells these cookies as well.

Foods Sold at the Sugar Bowl

Arthur and Buster talking over milkshakes 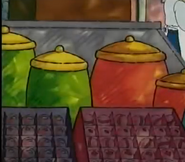 A chicken and fries dish.

An orange drink, possibly a soda

Harry, Buster, and Bitzi at the ordering counter.

A view of a booth from above.

The rarely seen bathroom of the Sugar Bowl.

The Sugar Bowl entrance in the winter. 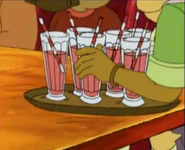 Milkshakes (or other drink) served at the Sugar Bowl

Carl at the Sugar Bowl

The booth from the wall to walkway