The Tree House[1] is a private clubhouse where Arthur and his friends go to hide away from D.W. and her friends, so that they can do homework, play games, spend time together, and do many other things in peace and without the loud nuisance of D.W. and her friends.

It is located in Elwood City, although its specific location has been inconsistent throughout the series. Sometimes it is located a short distance away from the Reads' House, and located a few paces from the Mill Creek. Other times it is shown as being in the Reads' backyard. It first appeared in the book Arthur's Valentine.

In Castles in the Sky, it revealed a background story where the parents of Arthur and his friends helped build it. During the cold winter in third grade, it collapsed during an overload of snow and Arthur's friends were planning various ways to a new one, but everyone had different ideas and eventually all agreed that the original design was best, so they restored it that way.

Arthur holds meetings here of his Bionic Bunny Fan Club with Binky, Brain, Buster and Francine. Despite the normal ban on D.W., D.W. was allowed in the tree house at least once to attend one of these meetings and proved popular by bringing treats.[2] The Tree House was the location to help cure D.W's fear of Spinach and another time she completely took over.

The tree house has a wooden structure at the tree tops of a tall tree and many wooden steps to climb up and down. There is also a rope on the branch. The tree house was originally a short tree with a few steps, and was entered aside from climbing up. In the book Arthur's Birthday, the tree house was re-designed with a taller tree, more steps to climb, and it is entered directly from climbing up. After being redesigned, it originally had a four-sectioned window, but the cartoon and later books replaced the window with a six-sectioned one. The window has a green (originally turquoise) curtain on the inside. In the books, the words "KEEP OUT!" is written to prohibit anyone from entering the tree house, unless he or she is one of Arthur's friends. 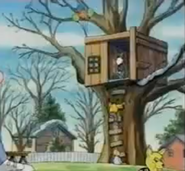 Tree house from when it was first constructed 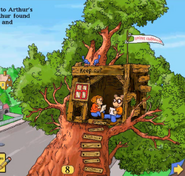 Arthur's Birthday
Add a photo to this gallery

Retrieved from "https://arthur.fandom.com/wiki/The_Tree_House?oldid=340425"
Community content is available under CC-BY-SA unless otherwise noted.