The Trouble with Trophies

"The Trouble with Trophies" is the second half of the tenth episode in the fifteenth season of Arthur.

Muffy wants Fern to admit she wants a trophy after George wins a class award for most improved student.

In the introduction Arthur wonders what it would be like to get a trophy every day. His family then piles trophies on him for things like waking up, brushing his teeth, and just being him.

The Trouble with Trophies

Mr. Ratburn awards George a Thinky for improving so much in school. Muffy congratulates him, but remarks that Fern should have won because her looks have improved so much. Fern tells the others that she does not care for trophies. Muffy cannot believe her. She assumes that Fern is hiding her sadness and wants to help.

Muffy, Buster, and George meet in Muffy's trophy room and decide to give Fern a trophy. Buster mentions that Fern has very nice socks, so they make a gilded sock and present it to Fern in the Sugar Bowl. Fern is writing a story about Annabelle Fauteuil investigating a theft in a museum when the others interrupt her. She tells them that trophies should be for things you do. Binky shows Muffy his socks, so she gives him the trophy.

Muffy, Buster, and George invent a poetry quiz and invite Fern to play. Fern brings Binky along who, much to Muffy's surprise, manages to beat Fern. Fern does not mind, but Muffy is annoyed, because Fern was supposed to get a trophy for winning. Fern is angry for being tricked and leaves. When Buster asks Muffy why the trophy is so important to her, she replies that she wants Fern to admit that she wants one.

Fern tries to finish her detective story but is stuck. Muffy brings her another trophy which Fern resignedly accepts. Then she notices it is for “Meanest Friend Ever”. Fern is hurt, but it gives her an idea for her story.

Muffy is putting her trophies in boxes when Fern visits her. Muffy admits that some trophies are silly, but Fern tells her that they have meaning for her and that is the important thing. Fern also gives Muffy a copy of her story which is dedicated to Muffy for being inspiring.

In the story, Fauteuil has deduced that the thief is hiding in a sarcophagus with the stolen sapphire. The museum director presents her with a trophy, which Fauteuil refuses, after which the thief runs off with it. 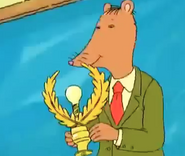