Tibbles to the Rescue

"Tibbles to the Rescue" is the second half of the eighth episode in the eighteenth season of Arthur.

When D.W. saves Tommy and Timmy from a nasty fall, they plan to repay the favor...whether D.W. likes it or not.[1]

Dark Bunny is battling Bananomanoman at the zoo. When Bananomanoman is grabbed by a gorilla, Dark Bunny rescues him by speaking in gorilla sign language, despite him having attacked him earlier. Bananomanoman thanks Dark Bunny and promises to help him out, and Dark Bunny shrinks him and put him on his toolbelt.

Timmy and Tommy Tibble awake, having dreamed the same thing. They find it "dopey" that Bananomanoman decided to help Dark Bunny, only to realize that they are now on D.W.'s belt, and scream. The Tibbles wake up from their nightmare and look at each other.

Tibbles to the Rescue

D.W. and Emily give their stuffed animals a tour of D.W.'s front yard. Timmy and Tommy are in a tree, preparing to attack them with water balloons. They start bickering over who gets to throw the first water balloon and fall out of the tree, landing on D.W.'s wagon of stuffed animals. Despite acknowledging that D.W. saved them, they throw water balloons at her anyway and run off.

Timmy and Tommy feel guilty and go to bed, where Mrs. Tibble checks on them, with a plate of cookies. They tell her that they were throwing water balloons at "a tree" and didn't enjoy it. Mrs. Tibble answers that she will give the cookies to Mr. Read, who baked her a birthday cake, saying, "When someone does me a favor, I don't feel good until I've paid them back."

The Tibbles realize why they are not feeling well and agree to follow D.W. around and rescue her when she is in danger. When they see D.W. about to drink a green drink from Vicita, the Tibbles fear it could be poisonous and attempt to save D.W., spilling the drink on her. Vicita tells them that it is an avocado and banana smoothie and is not dangerous.

D.W. is upset by the Tibbles trying to save her, and they respond that they will not stop until they can pay her back, "even if it takes all year." They then "save" D.W. from a thrown Frisbee, salt water taffy, and a soccer ball. D.W. angrily walks away, and the Tibbles wonder why. Emily explains that their attempts at "rescuing" D.W. are even worse than them teasing her.

Timmy and Tommy still do not feel well, and Mrs. Tibble tells them, "You can't just wait around for things to go your way. Sometimes you've got to make something happen." The Tibbles interpret this as that they should put D.W. in danger, and put together an assortment of objects.

In the park, Emily and D.W. believe that the Tibbles have stopped trying to rescue them. D.W. then sees her Mary Moo Cow toy being pulled into the bushes, and "her mom" (the Tibbles in disguise) show her that the toy is now on the top of the jungle gym. D.W. is able to easily walk past the traps and use a rake to get the toy down.

The Tibbles are mad and demonstrate that D.W. was supposed to get stuck on the jungle gym, getting stuck themselves. D.W. rescues them when they fall on Sharky, and the Tibbles are able to finally "rescue" her when they notice that her shoe strap is undone.

As an apology, the Tibbles give D.W. a croquembouche and promise not to bother, or "rescue," her for another week. D.W. asks, "But what if I don't give you a week off?" and the three have a food fight in the front yard. 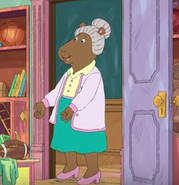