To Beat or Not to Beat

"To Beat or Not to Beat" is the second half of the seventh episode in the fourth season of Arthur.

Francine is practicing her singing and drumming for the talent show, but her friends just think she's making a terrible racket.

Arthur explains that Francine is great at many activities, such as baseball and winning arguments. Francine manages to fly, which Arthur is surprised at. Once he tells her that kids cannot fly, she falls to the ground.

To Beat or Not to Beat

Lakewood Elementary's talent show is coming up, and Arthur, Buster and Brain each discuss what they are going to do. They hear a loud noise coming from Francine's apartment building. Buster believes it's an exterminator that uses sound, and Arthur thinks it's a large machine.

They discover that the noise is coming from Francine singing and playing the drums, which is her act for the talent show. The boys leave and wonder if they should tell Francine that her singing and drumming sounds really bad. Arthur doesn't want to see Francine humiliate herself at the talent show, while Brain worries about hurting her feelings. Later that night, Arthur dreams about two different scenarios: one where Francine cries after being told the truth, and one where she is relieved at first, but then finds out that her song made someone else famous.

The next day, Brain thinks they should tell Francine about her singing while Arthur has doubts about telling her. Buster comes up with an idea: tell Muffy about Francine's act since she knows what's popular. Brain points out that Muffy would never say anything bad about her best friend. They disguise themselves and get a recording of Francine's singing without her knowing. They manage to get it on tape as they fall out by accident when a ladybug lands on one of their noses.

Muffy agrees that the recording sounds awful. Arthur reveals that it's Francine singing and playing the drums at the same time. Muffy is confused on how why Francine sounds so bad since she is normally a great drummer, then Brain realizes that the singing is affecting her drumming skills. The four of them realize that they do not need Francine to drop out of the talent show, just convince Francine not to sing. They head back to Francine's apartment to tell her, although she refuses to listen.

At the tree house, the four of them complain about Francine not listening to them and they worry that Francine will be humiliated. Francine arrives with the recording of her, asking what the terrible noise is. Arthur says it is her voice and that they recorded her while she was playing the drums and singing. Francine complains about no one telling her the truth, until Arthur says that everyone did. Francine feels guilty, and her friends comfort her, saying that she's still an amazing drummer. Francine says that she is not ready to do two things at once and takes her friends' advice.

At the Talent Show, Francine shows up but without her drums. Instead, she sings. Arthur and his friends fear the worst, but, much to her friends' amazement, she sings beautifully. She does not win the talent show (George does), but her friends still enjoy her performance. Francine says that she will still practice playing the drums and singing until she get better at it. 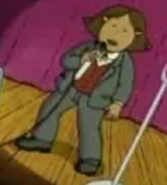