U Stink is a band featured in the special Arthur - It's Only Rock 'n' Roll. The name of the band is possibly a play on the names of bands U2 and *NSYNC, though in-universe they were named after a comment by Francine's neighbor.

U Stink was started by Francine Frensky to prove that you can have a good band and not sell out. They became a big hit around Lakewood Elementary and D.W.'s preschool, but Francine quit after the others wanted to go commercial. Francine was temporarily replaced by a drum machine.

U Stink reunited in order to support the Backstreet Boys, but split for good afterwards. 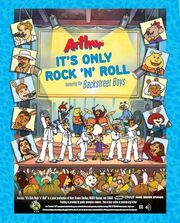 The members of U Stink are as follows:

Retrieved from "https://arthur.fandom.com/wiki/U_Stink?oldid=395452"
Community content is available under CC-BY-SA unless otherwise noted.