Unknown Female Adult Rabbit is an unnamed character who made her first appearance in the episode "World Girls". She made an appearance with her daughters at the World Girl World mall.

Her whole family was seen during the opening of the episode "D.W. on Ice" in a group picture that was taken by Arthur and placed in a museum. She appeared in the episode "When Carl Met George" where she was seen with one of her daughters. In the episode D.W. on Ice, her husband spoke in French to Arthur hinting she could be of French descent.

Unknown Female Adult Rabbit is rabbit with a tan complexion. She wore a purple shirt, long beige pants, and red sneakers. She has an orange purse and brown hair. In When Carl Met George her hair color changed to blonde and her complexion was a cream complexion. 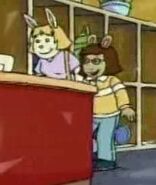 With her family.
Add a photo to this gallery
Retrieved from "https://arthur.fandom.com/wiki/Unknown_Female_Adult_Rabbit_(Number_5)?oldid=362127"
Community content is available under CC-BY-SA unless otherwise noted.