In her debut episode "World Girls," she was seen going into the World Girl World mall and even bought some things from the mall itself.

In the episode "Dancing Fools," she was in the same dance class with Francine and Muffy along with many other kids at the Elwood City Community Center. Her dance partner is Jack Weasel.

She made another appearance in the episode "When Carl Met George," where she approached and starting speaking to her mother, Unknown Female Adult Rabbit (Number 5) at the Elwood City Community Center.

Her father, Unknown Male Adult Rabbit (Number 4), spoke in French to Arthur during the opening to the episode "D.W. on Ice," making it possible that she and her whole family are of French descent.

Unknown Female Rabbit is a rabbit with a gray complexion. She wears a yellow and white collared shirt with long sleeves, long blue jeans, and dark blue shoes. She has long brown hair and wears rectangular lensed glasses. 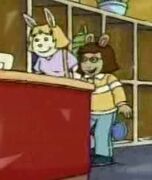 Unknown Female Rabbit with her mother.

At World Girl World holding bags.
Add a photo to this gallery
Retrieved from "https://arthur.fandom.com/wiki/Unknown_Female_Rabbit_(Number_5)?oldid=398074"
Community content is available under CC-BY-SA unless otherwise noted.