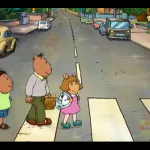 Was that an interesting enough beginning? Did it catch your attention? Probably not. Well, I'd mostly describe myself as someone who's in love with Arthur. It's a show that always makes me happy. I love it so much :D In fact, sometimes my friends say that I'm obsessed with it :s The fact that the main characters can still remain such great friends despite their faults, is a major reason as to why I like this show. There's also the humour for sure. My favourite characters would probably be Brain , Arthur , and Buster.

Title Cards- Adding extra details to linked episodes, adding pictures, fixing up grammar + spelling mistakes, re-wording sentences. (I've been very excited to work on this! Heh :) *This is one that I will work on over a period of time.

I'll be listing my favourite ones as I watch them again. And if I remember!

Favourite Quotes from this Episode:

Francine: "Hey, we should have an argument, Ratburn'll split us up, and then one of us will get to sit at Brain's desk!"

Buster: "C'mon Arthur, have an argument with us!"

Arthur: "I don't want to have an argument with you!"

Retrieved from "https://arthur.fandom.com/wiki/User:AwkwardArthur?oldid=106491"
Community content is available under CC-BY-SA unless otherwise noted.