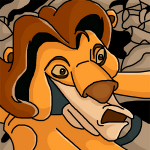 Hi! I'm from North Europe and occasionally draw comics, usually about already existing series. I watched Arthur as a kid on TV, and according to my knowledge, it hasn't been shown on television for at least ten years, and it's unlikely that it'll be shown again. So it's no wonder that I found Arthur again just recently.

For some reason, I don't particularly care about the main characters. Instead, most compelling characters to me are the Tough Customers. I guess I've always liked the villains more, and as the series went forward, they actually changed for better. Unfortunately, they are not seen very often, and excluding Binky, Molly and Rattles, the rest of them are relatively underdeveloped. Rattles is no doubt my favorite Tough Customer, but Molly is a close second.

At this point it should be no secret that I follow this series almost exclusively because of Tough Customers. Please don't judge me! I still enjoy other characters and everyday problems they face. As I watched the whole series, skipping most of D.W. related episodes, I took lots of Tough Customers related screenshots, and will add some of them to this wiki. My English is not perfect, so I'm not sure should I actually try to write something to the articles. :D

I'm also planning to draw Tough Customers related short comics and pictures. I'm trying to expand their characters and chemistry between each other, while staying true to the original source. For example, did anyone notice in The Law of the Jungle Gym, that Rattles stole ice cream cones from little kids? Such a small detail, but it shows how ruthless Rattles was back then.

Retrieved from "https://arthur.fandom.com/wiki/User:Mufasa3D?oldid=202674"
Community content is available under CC-BY-SA unless otherwise noted.