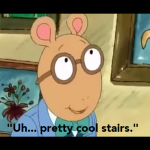 Hello there. I am a major fan of Arthur. I have seen every episode at least once and the vast majority several times. I was born just a couple years before the series premiere, so I was practically raised on this show. Seasons 3-4 and 6-7 are my favorites.

While on the Arthur Wikia, I enjoy adding random tidbits of information (character appearances, object appearances). I also like to provide insight about episode connections, since I have seen each episode.

Generally, I like to group the seasons as follows:

* Season 1-2 - setting the stage - nothing really extraordinary here, but there were a few weird/"out there" moments that added to the charm of the show from the very start, along with important events in the series (Mister Rogers as a guest star, introduction of D.W.'s snowball as one of the longest running gags of the show, Buster's multi-episode absence while he traveled)

* Season 3-4: a lot of outstanding stories in this era with iconic episodes (green potato chip, "Having fun isn't hard when you've got a library card," the Woogle fad, the catchy "BINKY" song, Art Garfunkel's musical interludes, "The Blizzard", etc.)

Season 6-8: new voices for Arthur and D.W. and new animation/coloring make these years stand out. A few more eventful episodes (the school fire in "April 9th", the school musical in "Elwood City Turns 100!", the introduction of Pal and Kate episodes (whether you like them or not), the infamous "Bleep" episode

Season 12-15: seriously slacking in the animation department. Stories and plots are hit or miss. Example: When Carl Met George (hit) and In My Africa (miss)

Season 16-19: pains me to watch these seasons as the Flash animation is absolutely horrendous, even as it slowly improves year to year. Arthur and D.W.'s voices hurt my ears in S16-S17. A couple decent episodes, but still hard to watch with stiff animation.

Season 20-23: Continual progression with animation quality. Voices are bearable and storylines are pretty ok. Includes the revival of hour-long specials, which are not entirely that bad either. Shorter seasons yield better stories.

My ever-changing list of top episodes per season, usually limited to top 5:

Retrieved from "https://arthur.fandom.com/wiki/User:PrettyCoolStairs?oldid=402851"
Community content is available under CC-BY-SA unless otherwise noted.