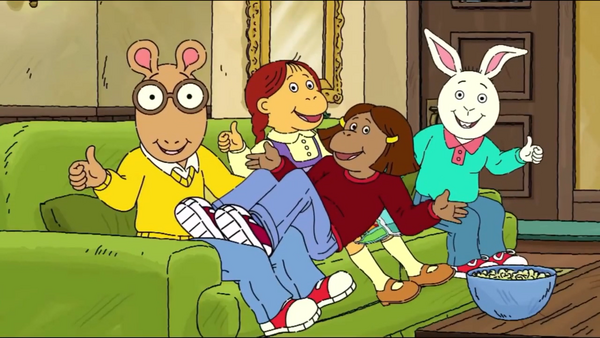 Do things look a little different around here to you? If so, that's because the Wiki Navigation at the top of the page for Arthur Wiki has been given a much-needed upgrade. It's now a lot easier to sort through things, at least, in my opinion. I hope it'll be easier for you, too!

In other news, I have a very exciting announcement to share with all of you: Discussions is now open on Arthur Wiki! This is a place where you can discuss about Arthur topics, be it about characters, episodes, places within the series, or whatever comes to mind, as long as it doesn't violate the rules and policies that we have here. Check it out! I hope that you will enjoy this new feature of Arthur Wiki.

Now, it's time for this month's brief history retrospective, which is about a former feature of Arthur Wiki that didn't exactly work out...

The Vandalism Statistics Board: Why It Was A Failed Experiment

The Vandalism Statistics Board was a former feature of Arthur Wiki that was created on December 7, 2011 by Annawantimes, a former admin here (and the same admin who started the original wiki newsletter here, The Elwood City Times). Its purpose was to document daily accounts of the amount of pages vandalized, bad comments posted, contributors warned, and contributors blocked. It was also updated once a day daily at around 8:00PM EST (Eastern Standard Time).

On December 7, 2011, there were a total of 8 pages that were documented to have been vandalized, and one contributor warned. From December 8-11, 2011, there was nothing to document. On December 12, 2011, a total of 3 pages were vandalized and one contributor was blocked. After December 13, 2011, the Vandalism Statistics Board was abandoned by Annawantimes, and no one volunteered to pick up the practice, even after Annawantimes stepped down as an administrator in April 2012.

For the next several years after the Vandalism Statistics Board was abandoned (4 years, 4 months, and 12 days, to be exact), no one even so much as made a minor edit to it, until a minor update was finally given to the page by DJ MC CJ on April 25, 2016. But after that, nothing would happen to the page again until a vandal by the name of Toby The Pug removed all of the content from the page on January 28, 2017, only for their vandalism to be undone 20 minutes later by another now-former administrator, 5000 Explosions and a Supernova. Nothing would happen to the Vandalism Statistics Board after that until another minor edit was made on August 9, 2017 by Agency, who is also a now-former admin here. In his minor update, Agency crossed out the part of the page that said that it would be updated daily, since it wasn't, and hadn't been done so since December 13, 2011! Once again, nothing happened to the page after Agency's minor edit until February 6, 2018, when another vandal by the name of SlySummar vandalized the Vandalism Statistics Board (the irony), and another user, Laundry Machine, undid the vandal's edit about three hours later.

After that, nothing happened to the Vandalism Statistics Board ever again, until it was deleted recently on May 31, 2020 by yours truly after I asked DJ MC CJ if I could delete it due to the fact that it wasn't serving much purpose, if any.

Overall, the Vandalism Statistics Board was a failed experiment. Why, you may be asking? Because to this day, people can report any vandalism they see to any of Arthur Wiki's admins, to FANDOM staff, or to the VSTF (which is the Volunteer Spam Task Force at FANDOM). Having the Vandalism Statistics Board on Arthur Wiki was just unnecessary and not needed in my opinion, and it's something that will forever be an old shame to this wiki. But hey, that's what happens when you try something new: Either it will succeed, or it will fail. That's the moral of this story.

And that concludes the retrospective for this month's newsletter. I hope you enjoyed it!

FANDOM is starting to move wikis over to the new Unified Community Platform. When the time comes closer for Arthur Wiki to move over to the new platform (which is powered by MediaWiki 1.33), there will be a banner notification on the top of the wiki informing users of the upcoming move-over.

How will this work, you may be asking? Here's how:

FANDOM will have alerts set for error spikes after Arthur Wiki transitions to the new platform, and in case if something goes wrong (because technology isn't 100% perfect, just like Hugo from the Arthur episode "Get Smart"), something that can't be fixed quickly, FANDOM will temporarily revert Arthur Wiki back to the legacy platform. If the transition to the UCP doesn't work correctly for some reason (like in the rare chance that either the import service fails or the content doesn't transfer accurately), or another issue comes up with the migration, FANDOM will temporarily point Arthur Wiki's URL back to the copy on the legacy platform, and will start the process over again.

For more detailed information about this process, please read this blog post by MisterWoodhouse on FANDOM Community Central.

FANDOM staff is here to help out wiki communities, including Arthur Wiki. The goal with the UCP transition is to ensure the long-term success of wiki communities on FANDOM / Wikia and Gamepedia by having them operate on a newer, better, singular platform, offering newly enhanced features, and much, much more.

Good news for those who live in the U.K.: Arthur Season 21 is finally releasing on BBC / CBBC!

Please note that this only applies to the U.K. region. These episodes have already long since released in the U.S., Canada, and even Australia. 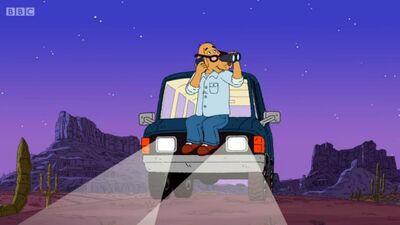 Mr. Morris is the former janitor at Lakewood Elementary.

In the episode "Finders Key-pers," Mr. Morris was the one who told Arthur, Binky, and Brain what the key the three of them found went to: The sprinkler system for the baseball field. In "April 9th," he broke his leg when Lakewood Elementary had a fire. He soon befriended Buster in the same episode, and he also gave Buster his accordion, Beatrice, when he was moving out of Elwood City to live with his daughter in New Mexico. Buster later met up with Mr. Morris again in the Postcards from Buster episode "Alien Adventure," when Buster was visiting Roswell, New Mexico, and in "Buster Isn't Buying It," Mr. Morris gave Buster some advice.

Overall, I like Mr. Morris. But what's your opinion on him?

So, that's it for this month! 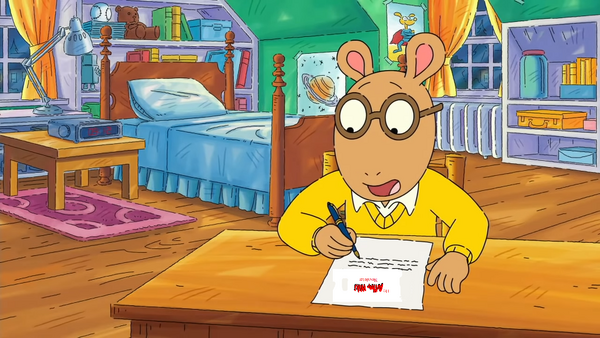 The Arthur Wiki Newsletter is released once a month, on the second Monday of the month. The next issue will be released on Monday, July 13, 2020.

If you have any questions or comments about The Arthur Wiki Newsletter, be sure to ask Arthur Read fan on his Message Wall, and he will get back to you as soon as possible.

Retrieved from "https://arthur.fandom.com/wiki/User_blog:Arthur_Read_fan/The_Arthur_Wiki_Newsletter,_Issue_3:_June_8,_2020?oldid=409332"
Community content is available under CC-BY-SA unless otherwise noted.