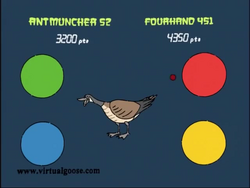 Virtual Goose is an online computer game that Arthur and his friends enjoy playing in "Sue Ellen Gets Her Goose Cooked." This game is very similar to Confuse the Goose, and may be an online version of it. Arthur describes Virtual Goose as "this totally amazing new computer game we found on the web!" Sue Ellen describes herself as "unbeatable" and the "queen of the virtual world" at Virtual Goose.

In the series, Virtual Goose hosts its own website, www.virtualgoose.com. While the domain used to redirect to Virtual Goose! on the official PBS Kids website, it has been put up for sale since November 2018 when PBS Kids retired their online games. The game featured on the website was absolutely nothing like any Virtual Goose nor even Confuse The Goose. [1]

Below are instructions in Arthur's exact words.

"There's this giant goose in the center of the screen and it spins really fast! And then it stops at one of the colored circles! And you have to shoot tiny balls in the goose's mouth. The more balls you get in, the more points you get."

Virtual Goose Version 5.0 (also known as Best of the Nest) is the second Virtual Goose game. It is introduced in the episode "Best of the Nest," where Arthur explains that since D.W. started playing, the original has gotten boring. Version 5.0 is mentioned in "The Butler Did It," and is shown again in "The Longest Eleven Minutes"

The excitement is brought up again when Muffy tells Arthur, Buster, Brain, and Sue Ellen that she has downloaded "Version 5.0" and that it is "so cool."

"In a time before time... in a place so remote it has never been seen before by upright mammals, the Virtual Goose laid 6 eggs. They were: Sporty Goose, Stylish Goose, Strong Goose, Silly Goose, Smart Goose, and finally.. just Plain Goose. Because of hard times, the Virtual Goose had to leave her six gifted children and pursue a career in online gaming. She vowed to return with fame and fortune. But before she could, an evil wind blew the nest out of the tree. Now these geese must fend for themselves. Alone in the deep dark woods, only one will survive. Choose a goose, pass the trials, and see if you can be the Best of the Nest."

In this fictional game, there are six geese to choose from. Arthur and his friends choose each goose according to their own personality.

In "The Longest Eleven Minutes," Arthur fights a strong goose named Takashi that wears a red, sleeveless shirt and blue pants. He appears to be one of the first characters in the game, due to the nest appearing close by. Because of Arthur saying "I lost Takashi" after the Internet shuts off, it is likely that they are controlled by a real player, which means that Best of the Nest has online multiplayer.

There is another level past 86 where you do the hokey-pokey to scare off a bear. Both Francine and Muffy are unsuccessful in passing this level. This means there are at least 87 levels in total.

In "George Blows His Top," Buster mentions that Muffy has upgraded Virtual Goose to version 29.2. It is not mentioned after this, and no gameplay is shown.