Volunteer of the Year is the seventh book in Arthur's Family Values, a series of Arthur book titles aimed specifically at teaching morals. The moral of the book is "Generosity." The book was written by K. Emily Hutta and illustrated by Judy Nelson.

Muffy gets a lesson in generosity when she and Arthur compete for the "Volunteer of the Year" award!

When volunteers are needed at the Senior Center, Arthur and Muffy both help out, but in very different ways. Muffy is determined to win the Senior Center's Junior Volunteer of the Year Award, but goes about it by making calls for orders and doing more to take care of herself. Arthur, meanwhile, plants a garden, hangs banners, shovels snow and spends time listening to seniors' stories, never really thinking about winning an award. But when the time comes to give out the Junior Volunteer of the Year Award, the result is unsurprising.

Francine is hanging out snacking with Prunella and Muffy when she sees Arthur and waves him over, asking if he's heard about Muffy's award. He hasn't and Francine explains that it's actually something Muffy is hoping to win - the Senior Center's Junior Volunteer of the Year Award, which according to a flyer is "for the young person who best demonstrates the spirit of giving." Muffy is sure that she's going to win and to prove it stops at a nursery on her way home and places an order for some plants, asking them to deliver them to the Senior Center with a note from her. Later that same day, Arthur visits the Senior Center and helps plant a garden with the plants Muffy had delivered, with the help of a senior named Mrs. Runyon.

Three months later, a Fourth of July picnic is held for the seniors. Muffy brings a box of picnic things, dumps with Arthur, and says to make sure that everyone knows she brought them. Meanwhile, Arthur helps a man named Mr. Evans decorate, shares some lemonade with him, and listens to his story of how he got his medals. At a Senior Center Crafts Fair, Arthur helps set up booths, while Muffy comes by and buys up five of everything being sold. Arthur comments that she bought a lot of stuff, but a woman named Miss Stine notes that money doesn't buy everything, such a scarf that she made for him.

In the winter, a big snowstorm hits Elwood City. Arthur enjoys a morning of sledding and snowball fights, but in the afternoon he calls Muffy, asking if she wants to go over to the Senior Center. She's not about to go out in the freezing cold, but Arthur visits the Senior Center, shovels snow from the path, then plays Go Fish with the seniors, and enjoys pastries from Eliza's Bakery sent courtesy of Muffy.

A few weeks later, it comes time for the day of the award ceremony. Arthur encounters Muffy at the florist shop, where she has ordered ten dozen roses for the Senior Center so they won't forget about her contribution. She says that she wants to look just right, and Arthur says he'll see her there, as he's helping his dad with the buffet. While Muffy gets her hair done, Arthur listens to Mr. Ronzini telling a fish tale. While Muffy takes a bubble bath, he plays checkers with Mrs. Runyon. While Muffy chooses nail polish, Arthur helps Mr. Evans put on his best jacket.

Muffy arrives at the Senior Center, shouting that the ceremony can start now that she's there. The announcer thanks everyone for their support, and then says that the Junior Volunteer of the Year Award goes to Arthur. Muffy is shocked, wondering just what it was that Arthur gave. "His time, his friendship and hard work," replies Francine. The seniors all cheer for Arthur and Bitzi Baxter takes his picture, asking him to give a big smile. 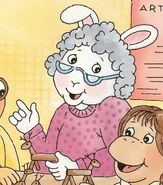 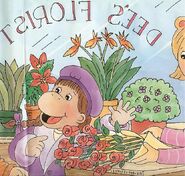 Retrieved from "https://arthur.fandom.com/wiki/Volunteer_of_the_Year?oldid=246359"
Community content is available under CC-BY-SA unless otherwise noted.