Westboro Apartments is a campus of apartments owned by landlord Mr. Sanders. Francine, Catherine, Laverne and Oliver Frensky live in Apartment #3 in the red complex. Mrs. Pariso is another resident who lives in Apartment #4 next door to the Frenskys, who moved into the apartment in Francine Goes to War. One of its policies was that pet dogs (such as Pal) were prohibited, but it did allow tenants to have pet cats. Francine also likes to play drums on the roof, much to the annoyance of the other tenants. This campus of complexes is located in Elwood City.

Francine and her family's apartment is a two-bedroom apartment consisting of a living room, kitchen, dining room, bathroom, master bedroom, and girls' bedroom. Francine and her sister Catherine both share one bedroom, while their parents, Oliver and Laverne share the other bedroom as a master bedroom. The central room has green walls and blue carpeting. In Francine and Catherine's bedroom, the walls are yellow (and sometimes green when swapping colors with the curtains) and the carpeting is brown, Francine's bed has light green sheets and a light and dark green plaid pillow, Catherine's bed has purple sheets and a purple pillow; and they also have green sliding curtains (sometimes yellow when swapping colors with the walls) in front of their window in most episodes, although the curtains were originally purple in Season 1. They own a pet cat named Nemo who first appeared in Francine and the Feline and has re-appeared in subsequent episodes, and he usually sleeps in Francine and Catherine's room on Francine's bed. In Francine Redecorates, Francine and Catherine's room were given decorations including lace that were preferable to Catherine among the special things that were only preferable to Francine, but Catherine temporarily moved into the living room along with her decorations for a few days until she and Francine finally agreed with each other's decorations, thus moving her stuff back into her real bedroom they both share. The decorations were seen again in Francine and the Feline and some other episodes following it, but the decorations were later removed post Season 4, and brought back the traditional sliding curtains. Francine and Catherine also have a computer in their room, although some episodes lacked the computer and vice-versa. The Frenskys had two TVs throughout the seasons: their first one was an '80s-style TV, and it was later replaced by a more modern TV. Francine and Catherine had three computers in their room, but only two succeeding the first one. Francine and Catherine originally had a black early '90s era computer that they both shared (although it was sometimes colored gray in certain scenes); and then they got a light blue one that only Francine uses in place of their old black one, and a black laptop that Catherine uses on her own, practically for research and school homework.

Floor plan for the Frensky's apartment.
Add a photo to this gallery

The Frenskys' first TV before Season 10.

The Frenskys' current TV since Season 10. 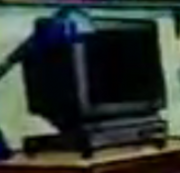 Catherine's own personal laptop since Season 10.
Add a photo to this gallery

The Frensky family was shown to own four vehicles. Oliver mainly drives a garbage truck and drives a pickup truck with a scoop on the front in the wintertime. They have two regular cars: a brown one driven by Laverne that was shown in Night Fright and in Francine and the Feline, and a blue one that only appeared in Prunella Gets it Twice, and are parked in the Westboro Apartments parking lot. Those two cars have never been shown again since. Francine also has a yellow bike that was previously Oliver's bike that was restored in the end of Stolen Bike, and since then had outgrown her old bicycle from her younger days. Catherine's bike is turquoise, and the only bike in the family to remain in good condition without being restored or replaced. Laverne is the only one who does not ride a bike. 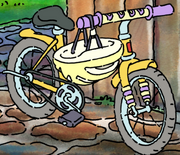 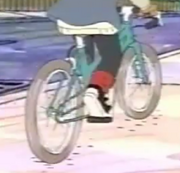 Catherine's bike
Add a photo to this gallery

The Basement is the location of Mr. Sanders' Office. There is also a room with water gauges that Francine checks in "Feeling Flush".

Retrieved from "https://arthur.fandom.com/wiki/Westboro_Apartments?oldid=381191"
Community content is available under CC-BY-SA unless otherwise noted.