"What Scared Sue Ellen?" is the first half of the twelfth episode in the third season of Arthur.

Sue Ellen, who is not afraid of much, hears a really scary howling noise in the woods and tries to get the gang to help her investigate.

Arthur is seen sitting in the living room that's dark while reading a book called "Very Scary Tales". He then tells the viewers that sooner or later, we're all afraid of something, like heights or big spiders. Arthur then says to the viewers about someone who isn't afraid of anything: Sue Ellen. Nothing seems to scare her, such as oral reports, the daily special at the cafeteria, and not even scary movies. Then Arthur tells them after what happened in the woods, she is still not easy to scare, until he hears a creepy voice and runs off, which turns out to be D.W. with a megaphone.

After the title card, we open up to the Tree House on a autumn day where Binky was telling his friends a scary story about a hook that got to stuck to a car and he pulls out a book and couldn't find a hook around and Arthur has heard of this story before and it was supposed to be a hook and Buster tells him that was really scary and ask Sue Ellen if she was ever scared of it while Binky continues on with the Scarecrow. Sue Ellen thinks it's just a made up story and they know it's just make believe, then Sue Ellen puts on her jacket and climbs down to the treehouse since it was time for her to go home. as she walk into the woods while whistling, she can hear the sound of a crow cawing and then heard a strange howl and thought it was her friends Binky, Buster and Arthur trying to scare her and then she hears it again and trip onto a root and sees a strange footprint and rans off and then passed by the bridge and notice she might have seen or heard something in the water and finally made it safely home and locks the door. then she got frightened by some scary looking paintings which turn to be her Parents while painting there face designs from Pablo Picasso.

That night, as Sue Ellen was in her pajamas she look out her window and closes it thinking that this is silly and thinks there's no such things as Monsters until the window came through her window and the lamp fell on the end table and the light bulb went out and thinks that someone is from someplace else from overseas and puts the lamp back on and looks into one of her books on the shelves and believing it could be Baba Yaga, the scary ogre lady from the Russian Backwoods and then she Imagines it. as she was imagining she sees the Treehouse but then it turns into Baba Yaga and chases after her for her lunch and then she wakes up in her bed and went to her window until Baba Yaga appears telling her don't be late for school and wakes up again from a that nightmare she was having and wonders what's gotten in to her. as she was walking to school, she seen a black cat passed by and then Binky shows up. he then tells her that he and his friends just finish making the scarecrow and ask if she wants to see it, then she said no and she doesn't want to be late for school, but Binky decides to take a shortcut though the dead woods, but she tells him maybe later.

Meanwhile, at the Playground, Binky tells Arthur and Buster tells her that she was scared, but Arthur wonders what was she scared of. Binky thought a second and he thinks it could be a Mummy. but Arthur notices that mummies are  too slow, since Sue Ellen can outrun one and Binky thinks not if the Mummy had a mountain bike. Buster knows that nothing can scare sue ellen and then believes it's not from earth and someone has seen a real alien, until then Sue Ellen shows up and tells them that it wasn't a aliens and it's worst. Sue Ellen then shows Binky, Arthur and Buster about Baba Yaga and believing what scary about that and then they laugh about it. then she tells them to stop it and told them it's real since Arthur thinks it's one of her stories and not there's and ask her if she ever seen a Baba Yaga while she was in Russia, then Sue Ellen ask if Buster has ever seen a real space creature and his answer was no.

Then she thinks it was something else while there we're at the bridge. Buster tells her the creak always gets noisy around here and it just happens to be water or could have been an Kappa, a hungry water demon from Japan which Sue Ellen just figure it out and the only way to defeat is to make it bow. then she and her friends Imagine thereselves in Japan on a bridge drinking water until a Kappa shows up and then they we're frightened. then Buster tells the Kappa that he sees a $5.00 bill and then the Kappa bowed and they ran in sight until the Kappa was stuck. after the Imagine Spot, Sue Ellen and the Others we're walking in the woods until Arthur thinks she must have heard a bird or rather a Banshee from Ireland  and they say her wail foretells doom anyone she visits until they Imagined it as they we're warming up by a fireplace in a castle until they heard of the sounds of a Banshee when they heard the sound of her wailing coming by and Binky soon slammed the door and the Banshee end up getting hurt.

After the Imagine spot, Binky knows what so hard about that until they heard of the howling sound and thinks that sounded like his Mom calling him and Sue Ellen then grabs his hand and kept walking and they heard it again and hid by since Buster thinks it could be an intergalactic creature of somekind or it maybe a chipmunk and Arthur thinks they wanna leave and Buster shouts out to that sound that it doesn't scare him and then they heard it again and Sue Ellen suggest they should run and Arthur asked what are they afraid of and they didn't see anything until Buster just saw Baba Yaga which frightened them, but it turns out to be there Treehouse all along. but Sue Ellen tells them they can't go on like this and there scared of everything, then Buster thinks they we're okay until she told them all about those stories and Arthur tells them they are stories, but Sue Ellen knows it's real and Arthur thinks there's a logical explanation. for this and then of all of sudden they heard that howling sound again and Sue Ellen tells Arthur, Binky and Buster when they find out what that sound is, they'll let her know by the time she ran back home and they ran with her as well.

After Sue Ellen gets home and locks the door, her parents tell her to join to see one there old Swiss Alps adventures for a slideshow. her Mother tells Sue Ellen about how they remember being afraid when they climbed there first mountain, then Sue Ellen ask them there question how they conquer there fears and her Dad did as they told her when they we're prepared and with there equipment, they could face there fear head on, until Sue Ellen notice it until she decided to face her fear as well. Binky was eating chips while watching a scary movie in his bedroom until he heard the phone ringing and it was Sue Ellen since she was going back and tells him that they will never be able to use the shortcut again, if they don't face that thing and she tells him that they must be prepared and use the right equipment. so Sue Ellen hangs up and goes into her closet to get the right equipment and got into some rain boots, her swimming goggles, a rain hat, a karate belt, a tennis racket and a flashlight by the time she to Binky's House and tells him to come along.

then Arthur and Buster joined in with Sue Ellen and Binky and arrived at the woods and she told them not to scream and Arthur agreed. as they search she hears that howling sound again and it turns out that it's coming from the dead tree by a bunch of rocks. she turn on her flashlight and found out that the howling sounds was actually Mrs. Wood's Dog Perky who was stuck in the big branch and tells her friends to come over and see. so Gunky saw it down and Mrs. Wood was proud to see her lost dog again and she thought she was worried sick about her it turns out that Arthur told Mrs. Wood that they all saved her dog and told them that they we're a brave group and decided to give them a big kiss, but this scares them away.

Back at the Treehouse, Sue Ellen was telling a scary story about a two headed Wolf-Man, but it turns out that Binky couldn't find a wolf's head and instead use a Cow's head in which Francine notice it and Brain thinks Sue Ellen did really like Scary Stories and she could think of something so cool. 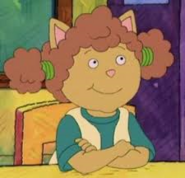