Whistling in the Wind

"Whistling in the Wind" is the second half of the second episode in the fifteenth season of Arthur.

The Tibbles look the same, they act the same, they even have the same number of hairs on their heads. So if they are supposed to be exactly the same, why can Tommy whistle while Timmy can't?

In the introduction, the Tibbles recite a poem about the joys of being twins, which include never being better or worse than the other. But then it turns out that Tommy can whistle but Timmy cannot.

Whistling in the Wind

D.W. shows Emily a sock puppet at preschool. She believes that Miss Morgan did not really like it because Arthur once made a better one. The Tibbles tease her for having an older brother. Tommy claims to be two minutes older, but the twins have equally terrible sock puppets and the same shoe size. Then Tommy whistles, but Timmy cannot, which prompts sarcastic applause from the girls.

That night, Timmy practices whistling to no avail. Tommy refuses to teach him, because teaching without a “Mister” in front of his name could get him into jail, and Timmy could not break him out because he could not give a signal.

Timmy has a dream, in which he removes bars from a prison window. He tries to whistle, but Tommy has already escaped through a tunnel. When two guards approach with dogs, Tommy whistles and makes both dogs and guards sit down. Tommy whistles for a sports car and, when the police block the road, he puts on a superhero costume and escapes while Timmy is caught.

Timmy tells D.W. and Emily about the dream and asks them for a teacher.

Buster tries to teach Timmy, but Timmy can only blow raspberries.

Brain examines Timmy's mouth and concludes that it is simply the wrong shape for whistling.

When Timmy returns home, Tommy is just showing off his whistling skills to their grandma. He is able to whistle a Mozart tune and whistle and gargle at the same time. Timmy jealously attacks him. During their struggle, each knocks a front tooth loose. Now both can whistle, to their delight and their grandma's visible discomfort.

The Tibbles practice whistling in the preschool playground. Windows crack and the other kids hold their hands over their ears. Emily and D.W. agree that it is good that the Tibbles are friends again, then they run inside to work on their sock puppets. 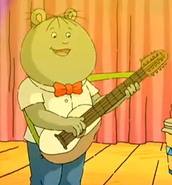