Woogles are a collectable toy, and a big trend/fad in Arthur Rides the Bandwagon

Woogles can squeeze, bounce like a ball, stretch like a snake, shimmy and shake, and talk when you hug them. They can also be customized to wear outfits and other gimmicks.

Everyone in Elwood City (including the grown ups) had at least one Woogle. However, when bottle cap clicking became popular, Woogles were shown to have been forgotten.

Arthur was the last known person to obtain a Woogle. He tried to sell it at a yard sale, but no one bought it. Eventually, he sold it via advertising on the Internet.

Muffy still has her Woogle collection stored in the basement of her mansion.

Poogles are the cheap knock off of a woogle. 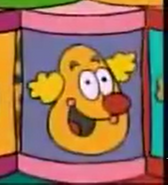 An orange Woogle (Arthur's first and only)

A pink Woogle from a commercial

An orange/yellow Woogle from a commercial

Retrieved from "https://arthur.fandom.com/wiki/Woogles?oldid=401575"
Community content is available under CC-BY-SA unless otherwise noted.